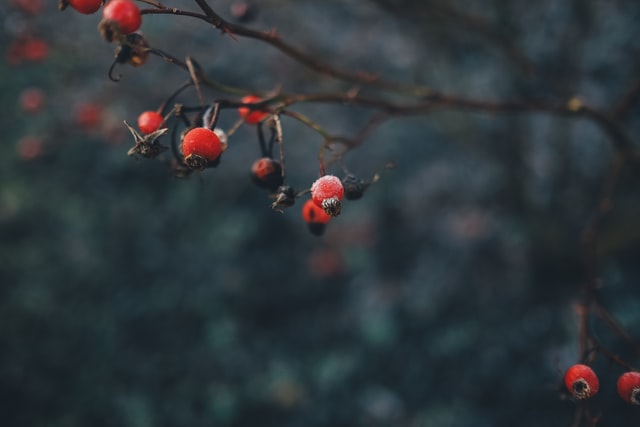 The coo of pigeons calls me back
to leaf mould damp
and watered sun
that glistens on the turning leaves
of childhood memory
where lone I walk through time.

I see the lithesome hips of rose;
a blackbird poised
on

The hour of evensong has come.
I kneel
and peep between the steeple of my hands
at sandstone arches stained
by saints in glowing robes
whose scarlet hues and sad eyes fall
on chiselled names of those
who passed this way before.

The Advent candle flickers
in the fading light of day,
a rose-rimmed eye that blinks
and forces out a waxen tear
for those, my kin, who died.

Chapter 2
Beyond the Wit of Daylight Hours 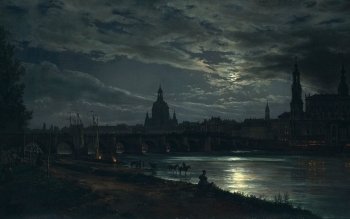 I have wandered in dark places,
and sought reflection in silent pools
bathed in moonlight,

on paths beyond the wit
of daylight hours,

and there have found
in solitude
the truth in dreams,
the music of deeper worlds than ours,
a confluence with faerie land

that, in kindness,
binds us to ourselves
and to our clay,
when comes the newborn day
and leaves such echoes
as do haunt the song of birds
and mists that rise from dew;

a bidding to fare well,
as blow the winds into
the fleeting sails
of friendship
found each day anew
in ancient grains of sand
and pulsing veins. 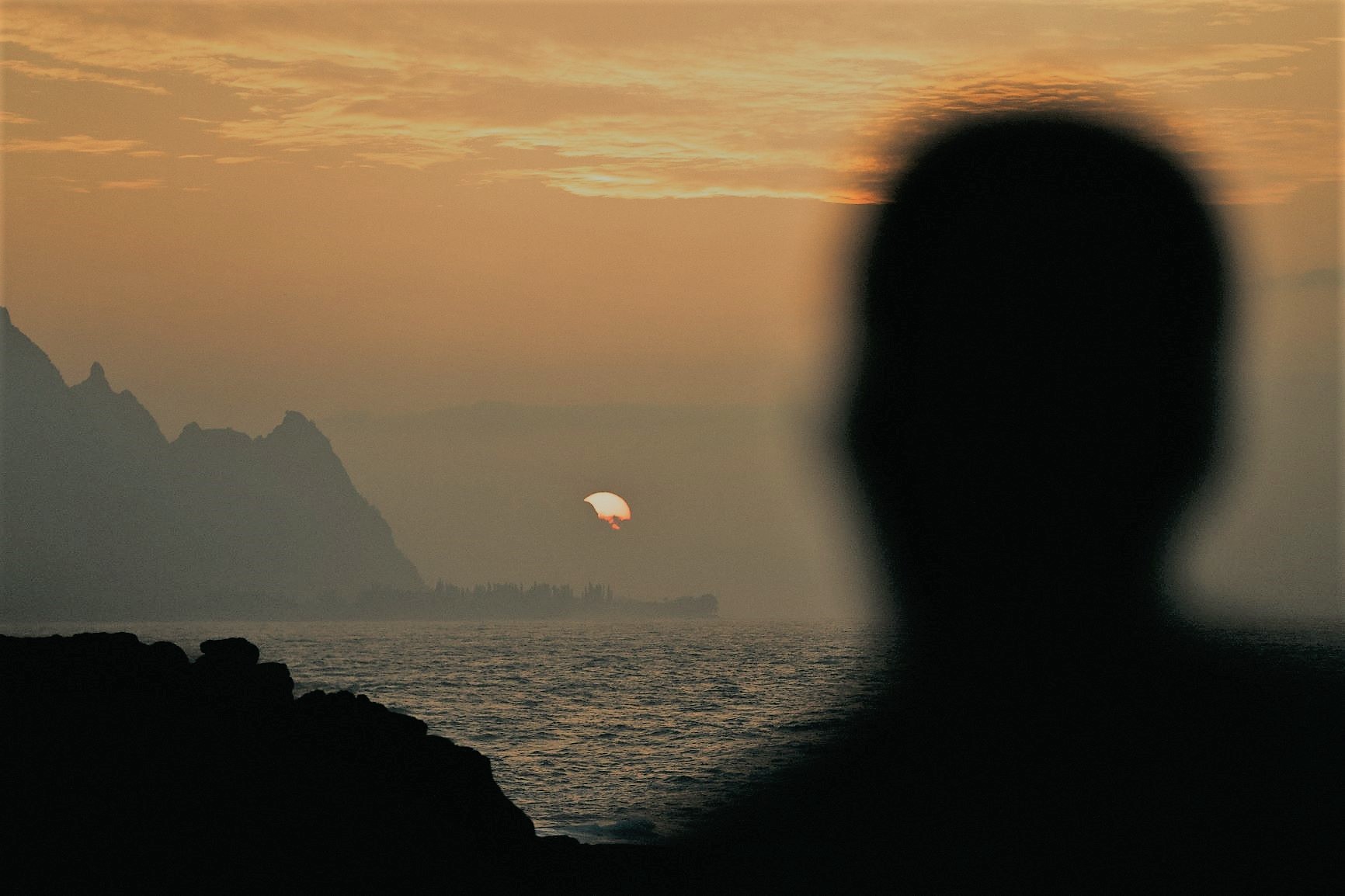 The light is drowned tonight
beneath a turquoise sea.

All colour fades to black,
the world lies still,
falls cold,
and calls the darkness
out of me.

What slight shadows
cloud my mind,
when set against
the vastness of the void
beyond the shapes we see.

Yet, with their darkness gone,
I've space
and time to think
without the thrall of day,
discerning now the part,
though it be small,
that I shall choose to play. 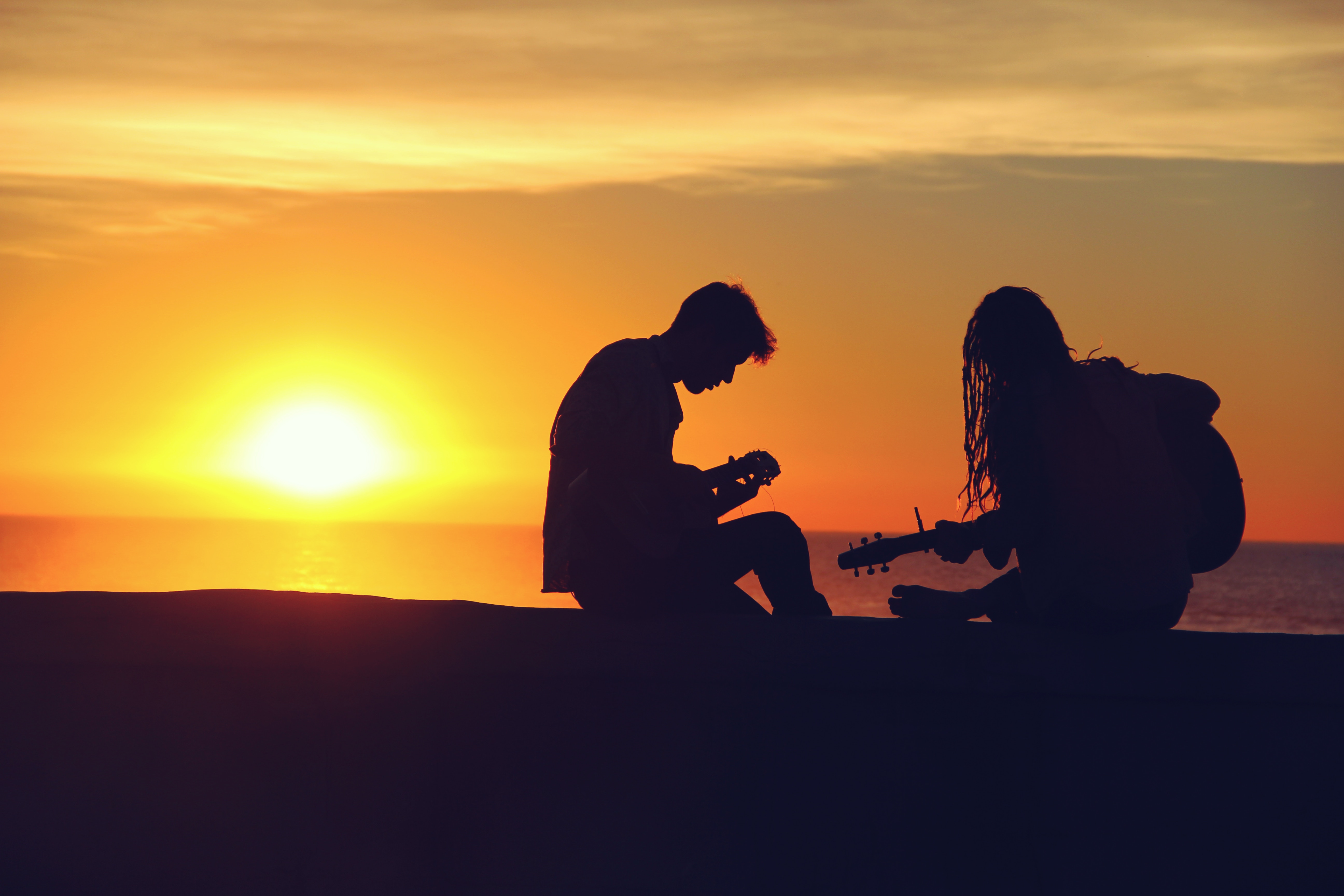 The sleeping music lies
in harmonies of stream
and spring and waterfall;
glissandos into pools
where quiet waters swirl,
and leaves stirred by the evening breeze
perform a pas-de-deux.

When silken skies subside,
enchanted,
gold and rose,
their glow embalms
the sallow flesh of day
and calms each bruise,

till in sleep I'm drowned
with echoes of those
whose shadows form,
like flotsam
on the dead sea swell;
fragmented figures from the past,
now bereft of sound. 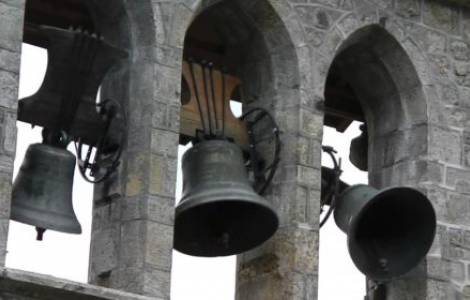 Strike words like bells
in blacksmith's forge,
each chime a shuddering hour
that fades;
hours of iron,
once strong and brave,
on warhorse hooves;

At length, a few return
on metalled roads;
their ears still ring
with words and deeds
that will be told, and tolled
in mournful carillon,

each widowed word wrung out in grief,
then spread across the world. 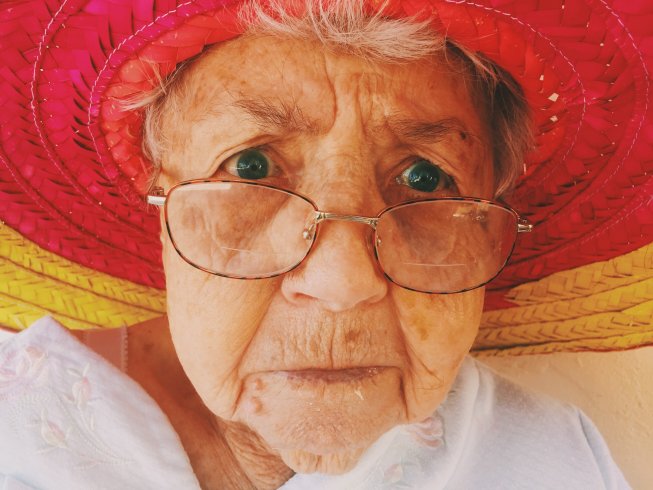 Her life in tatters,
lost, and ash
concealing just the twisted knife,
a melted pot,
and bones;
calcified remains on which to build
the framework of a life again.

I saw her face, annealed by fire,
grey haired and gaunt, with lilac eye.
She gripped her spade,
and then began to dig;
such strength as this our women have. 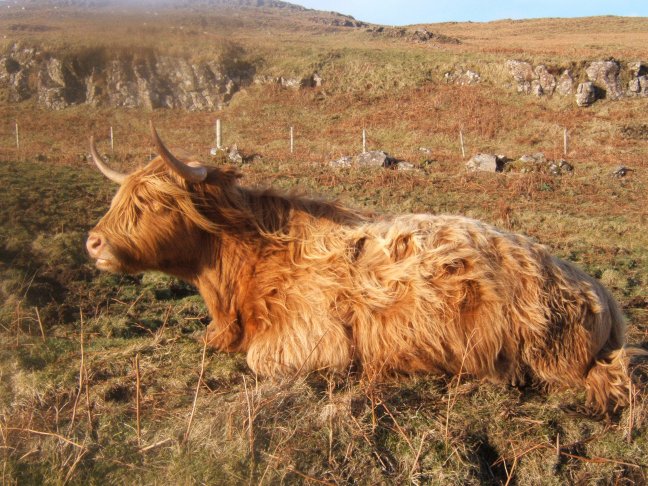 Her liquid eye holds dreams
of chaff twice chewed
and that's enough
to fill the stomach of her mind.
How deep need ruminations be?

Between those horns there lies
the bovine essence of eternity;
contentment, chewing cud,
like you or me.

Yet we who fence her field
of winter hay,
will send her, in due course,
to the slaughterhouse.

Will deeper thinking make her more secure
or happier? 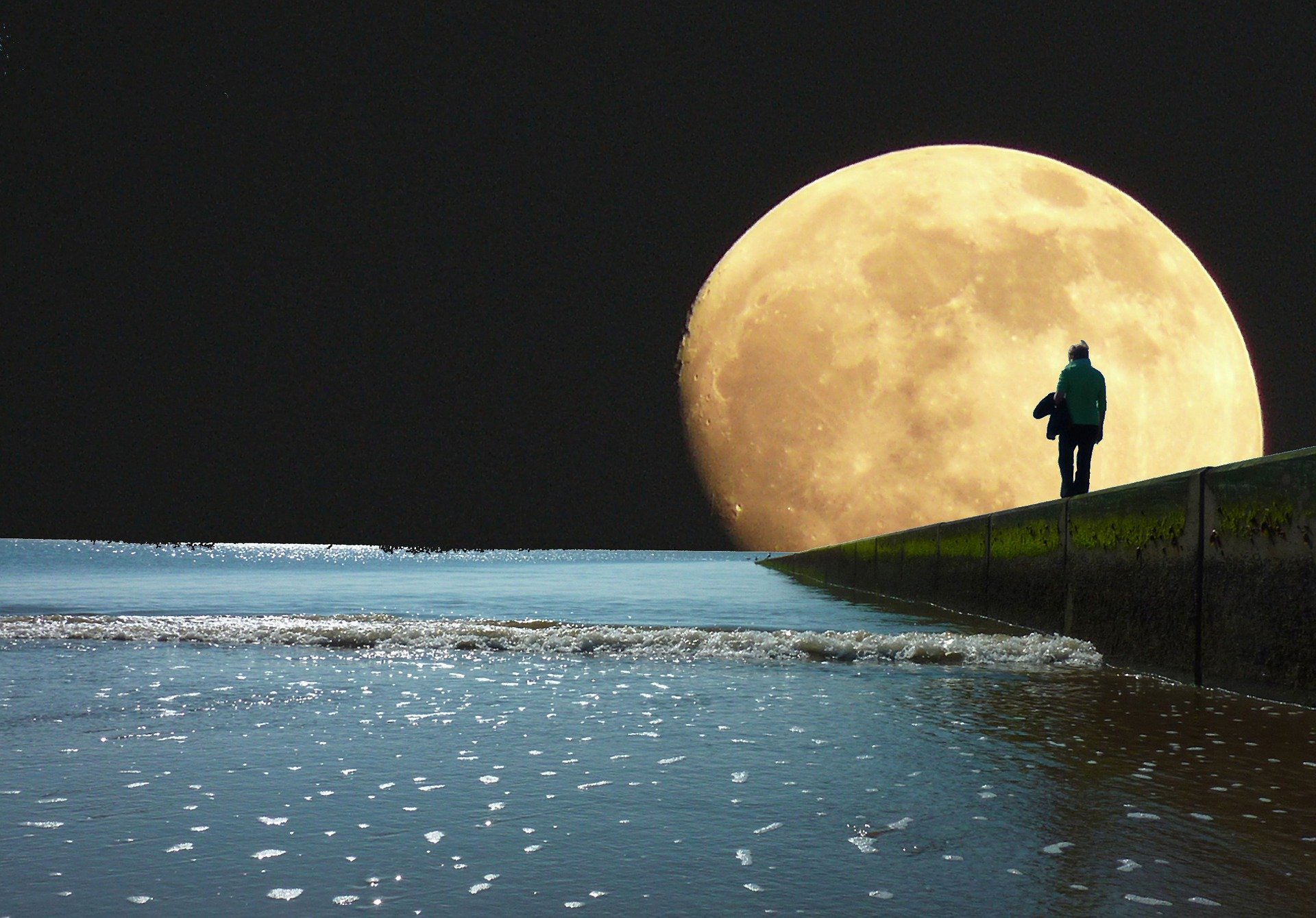 Silver still the sea tonight,
a luminescent, viscous thing
of listless lull,
and solipsistic slop
and murmuring,
that softly sucks the life from hidden holes
where monsters lurk and wild imaginings
drift dead men in to shore
on slack-jawed tides
and drag them out again,
where gormless hagfish swirl and swim
beneath the dark viridian
of clinging kelp and bottle-blue Physalia,
whose lethal droop of tentacles
hangs low
to drift, 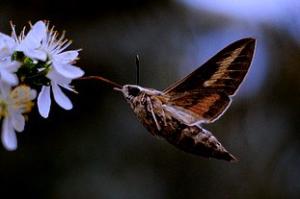 The air tonight's distilled from jasmine flowers,
a whiff of pheromone.

Hawk moths hover,
tipsy wraiths that waft from cup to cup,
with casual promiscuity,
till lifted by a sultry sigh
to kiss the sequined, velvet dress of

night
on wings of moonlit lace. 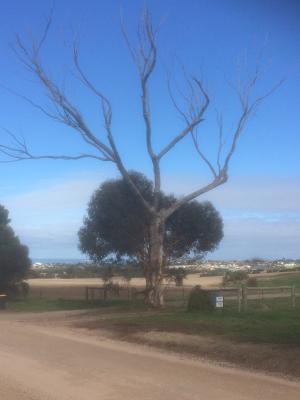 The tree at my front gate
I'd given up for dead,
gnarled joints and sere,
some straggle leaves below,
a last hurrah I thought,
and that was fifteen years,
or more,
ago.

Flocks of cockatoos sometimes come,
and settle on
its outstretched arms.
Their clamour mocks with raucous life
its long dead limbs,
while down below,
the straggle leaves gain strength and grow.

Its yearning limbs, on one wild night,
closed round a hunter's moon,
clasped its bulbous bloat,
in heartless mockery of life
but, rooted firm, could not take flight
like seas receding - tide untied -
for still its pendules stayed alive.

At dusk a whispered silhouette
posed against the charcoal sky,
a silent swoop, a sudden cry,
yet still the straggle leaves possessed
their pulsing thread of sap,
undaunted by the death throes of
such heart-torn prey.

I almost euthanised that tree. 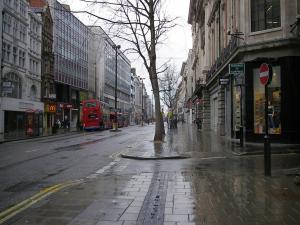 In the dark foreshadowing of doom,
I slumped with measured tread
past London monoliths that rose
dejectedly
towards a glowering sky;
my thoughts like lead,

when, suddenly,
the sky was torn apart with blinding force.

Thunderstruck, I pulled up short
and raised the collar on my coat.
The rain began,
small drops at first
that slapped and stung my face,
whipped up by wind
into a furious assault
that left me cleansed,
elated by the primal force,
and soaked,
no longer in self-pity
and slum-pervaded thought,

but in the glorious freshness,
steam on stone,
as the glistening sun came out again,
defiantly adorning streets in evanescent gold.

It takes, at times,
a sudden storm to wash away the grime
from city streets and living. 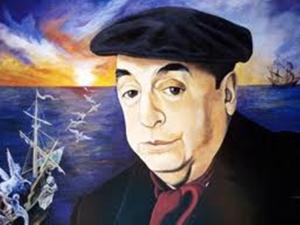 His words flow like liquid in his own language,
a turbulent and raging torrent
to erode rocks,
and cause avalanches
amongst the stone-hearted;

songs with rhythm
sucked
from the oozing blood
of oppression,
to infuse
the pulse of rebellion;

songs intoned in whispers
deep in the muffled snows
of mountainous
dissent;

songs to thaw
rime-encrusted hatred,
dripping from
the brows of the beaten,

and to undermine cupidity
with the voluptuousness of love. 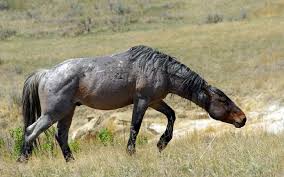 A shadowed wraith on weak arthritic limbs,
the old horse leaves his shelter-belt of trees
beneath a sickle moon.

From the still and patient night,
there breathes a whispered breeze
to beckon him,
as it has done before.

He slowly comes with measured tread,
to stand upon an earthen wall
above the pool reflecting him,
and, facing east, he waits.

His chestnut coat
by night bedewed,
his head and neck held low
as if in prayer,
and there, stock-still, he stands,

until the first sharp rays
break out above the hill
to bathe his ears in splendour,
then his back,
brazing him once more,
a burnished bronze,
fit for Bellerophon to ride
against the Chimera of day.

The shadows, mute, shrink back
aghast,
in reverential awe.

Still, this ancient horse stands still
as does the world and time,
his head now raised
to breathe a wisp of breath,
a soft grey incense
silvered by the dawn.

and then, to hail this newborn day,
there starts a joyful chorus,
the orison of birds.

when a sigh in the trees
rippled through the leaves
and their toes started tapping
in the dust,

their toes started tapping
and itching to the rhythm,
the syncopated rhythm
of their dance,

and you couldn't see their feet
as they wove a birdlike flutter
in the utter joyful stutter
of their dance.

Then they swirled and they glided
and they gracefully subsided
in torrents of clear laughter
from their hearts,

a taste of the hereafter
the gods have surely given
to those who dance together
in the dust. 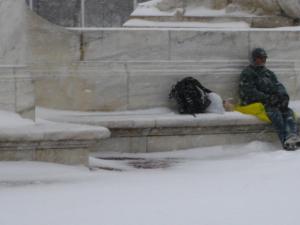 a deadly flutter
that numbs the raw
of snow-grit homeless heaps.

Can you hear the crunch
of frozen sidewalk smut
beneath that traffic noise and siren scream?

I do not lie -
I need your money for the ice!
Rainbows glisten in the sun
as it grows crystal cold.

Then comes the thaw,
and whirring snowplough brush
to sweep away
the residue of sidewalk slush,
assaulting grime
with tears. 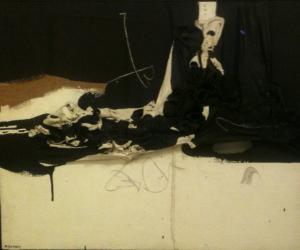 He paints the spaces between his images
with as much care
as a poet writing behind the lines.

His puppet, a Pierrot figure,
lies slumped
on a narrow pavement,

with loosened strings,
no longer dancing
to the tune of war.

Each brushstroke licks around
memories of leaden soldiers,
as if they were ice-cream melting

on a hot summer's day;
a foretaste of death
dripping on the nursery floor. 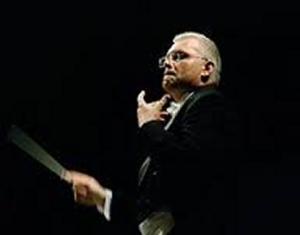 A ripple rises as the lights are dimmed
that grows into a crescendo of applause.
The great man appears.
An Emperor Penguin,
he sweeps across the stage
and mounts the podium
then turns,
surveys his audience,
and nods acknowledgement.

The scene is set. His baton raised,
he holds expectant silence in the air,
then gently coaxes murmurs from the violins,
a rising susurration of bees set free.
He suppresses them
with a gentle downward movement of his hand,
turns his pointer to the larger deep-voiced strings,
demanding their masculine response,
an ominous drumbeat of rising sound
that enforces interplay with melody.
He draws music forth
with an outstretched hand.

The tempo quickens to the strident shudder of his jowl.
He turns a white-tipped laser to the centre of the pit.
It strikes, exploding brass, timpani and a kettle-drum
before an opening blossom of cymbals
stops their breath.

Majestically, he cuts the air.
Great swathes of sound escape,
marshalled by his rhetoric into ranks.
His eye is wild, he leads the charge
as if on horseback,
the rise and fall of his shoulders
mimicked by a rippling surge
across the silken blackness of his back.
He cuts the sound away again,
severing its roots with silence.

A single flute dares defy him now.
It mourns the melody with keening liquid notes.
The maestro turns
and coaxes once again the strings,
drawing from their amber hearts
accompaniment,
a waterfall of sound
cascading from Olympian heights.

The final notes ascend.
They float like butterflies returning to the gods.
The audience erupts,
washing the magic away
in a torrent of sound.
He turns, bows low,
acknowledges the thunder of applause,
then is gone.

The orchestra subsides
like puppets who have lost their puppeteer.
Exchanging pleasantries, they pack their bags for home.
The symphony is done.

Chapter 18
The Road to Salamanca 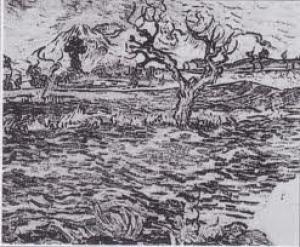 We drove to Salamanca, you and I,
a bleak greyness of snow on distant mountains,
the foreground rocky, harsh and unforgiving,
a landscape of grey-green ghosts and pining.

A solitary bull breathed thin vapour
across our final olive grove,
and fog swirled, licking at the edges
of our relationship.

The ancient town
disgorged
a soup of salt cod, spinach and

chick peas
the last vestige of warmth
as daylight drained from the cobbled streets
and left us to face our reality. 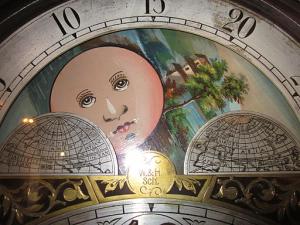 to and fro
they go

into a haze of bygone days
and dust
suspended in the moonlight.


tic of the clock
drips time, drop by drop
ere the cuckoo calls

to cut the thread
that binds us
to the metronomic madness
of the clock.

We exchanged paper tigers
in the dark days
of the Kurt Cobain addiction,
neither understanding the other;
I, still enmeshed in the cocoon of her childhood,
she, struggling to emerge
and test her newfound wings.

Never mind that
exotic night flowers are poisoned
and enticing flames burn
for we all must learn to fly.

It took time for me to learn
that she would write her own life
in free, unrhymed verse,
not the straitjacket of the formal sonnet
proffered by her parent.