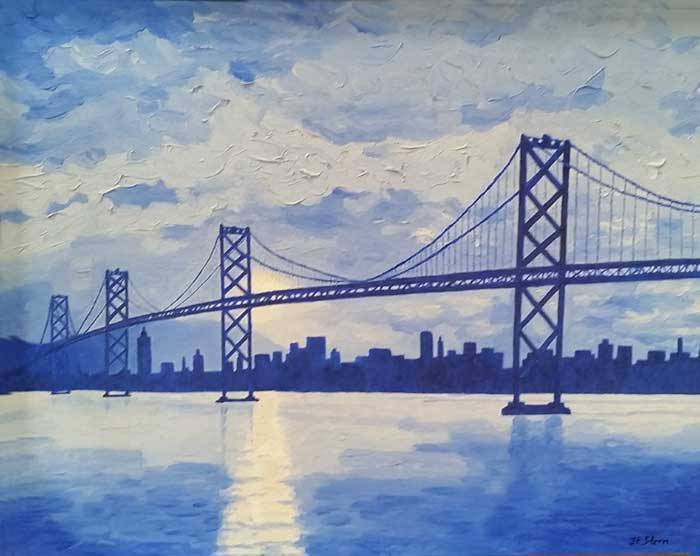 Where are you, JoanE? Your kind, gracious and gentle presence is missed here. A haiku or a tanka flowed from your pen, faithfully on Fridays and always so generously promoted.

You thrilled us with your travel poems. Your verses showed us places that we may never dare to venture to like the Baltics or the remote countries of Asia. But even the places closer to home, you took us along virtually in verse and gave us a fresh perspective. Thanksgiving Day train rides were an annual tradition we anticipated.

You were always learning and contemplating cultures and history and shared your thoughts in well-distilled, succinct verses. When you visited with other writers, your reviews were positive and encouraging.

I never met you in person. I hoped that I would one day visit Southern California and amble around the Getty Museum. Beforehand, of course, I would have consulted you for advice. Where should I focus? How should I view the art I might see? How might I expect the art to speak to me? You would have broadened my perspectives, I am sure of it.

You are missed at the park you used to walk. Young people were drawn to you, because you would listen to their stories with loving interest.

Your feathered friends at your generously stocked feeder would wonder where you are. Just like them, we miss you.

Thank you for all you shared. 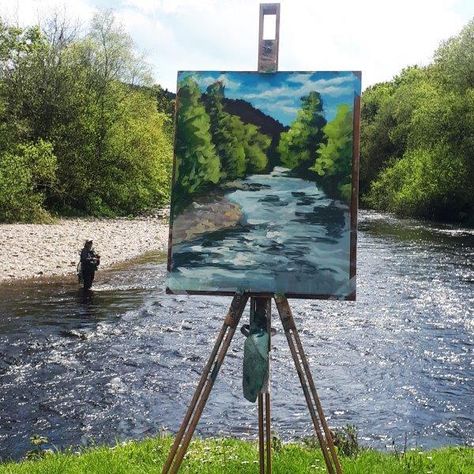 one splendid stroke at a time

her masterpiece is complete 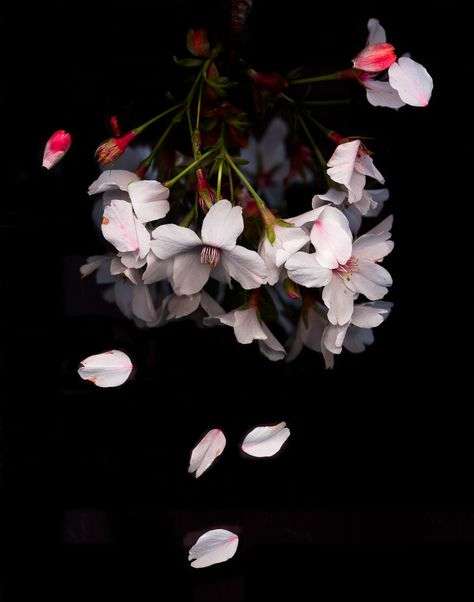 Chapter 2
Written on the wind...

If time is written on the wind,
then only God time can rescind.
Though farewells may be said my friend,
for me your mem'ry cannot end.

I've shared your journeys in past years,
through joys and now entwined with tears.
My hope we'll meet again someday,
yet in my mind I can but pray.

Life's journey can be bright and full
though tinged with trials none can cull.
I'll miss your presence on this site.
we'll meet perhaps in God's sweet light.

If all things work together friend,
they say that joy can never end.

Joan E who has been a dear friend, colleague in writing, and fellow journeyman on Earth and on fanstory,
She Is currently in a coma, on morphine, after being treated for the last 12 months for cancer. If you have faith pray for Joan, and comfort for the family.
God bless you Roy Owen

Chapter 3
Safely, Softly into the Light 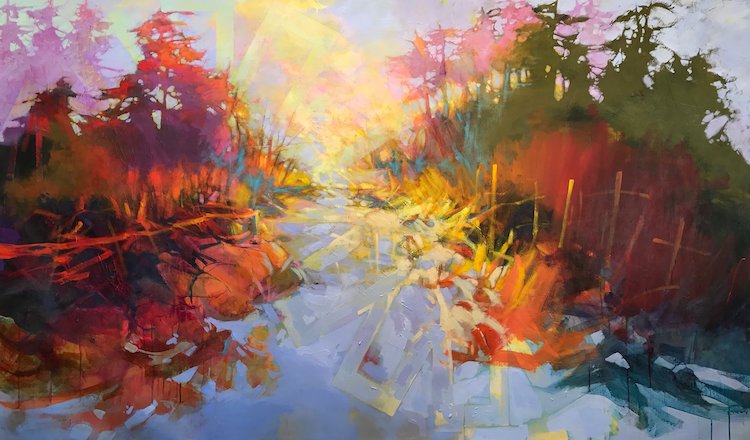 When movement’s gone and stillness reigns –
When fixed are limbs that once rejoiced
in loving hugs and hobbies, too:
a poet’s pen with lovely voice…

What remains are mere footprints of
a soul searching for its home,
Where waking joy and fields of green
crown hugs in everlasting arms! 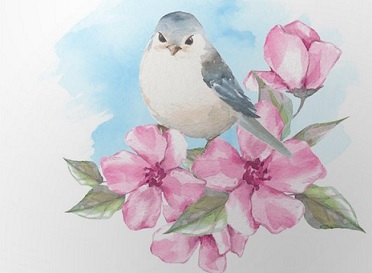 Words aren’t coming easy today
So I’ll begin with Miss Emily—
hope is the thing with feathers
that perches in the soul.
I thought you’d like my feathered friend
Who’s helping me with
Things I want to say.

I look deep within my heart
To show how much I care,
And how I’ll miss
The special words you shared.

O’er land or sea or air
You always took us there
And gave us such delight.
Now, it’s our turn
To say how much we care,
And how you will be missed.

You brought special joy
To our writing site
With train rides, concerts,
Theater, too.

Though you won’t be writing
Travel cards
Of ventures round the world,
I know you’re in a sacred place—

Where He is there,
Taking care of you,
Letting us know
Loving hands are
Guiding you along
This journey
Everlasting.

Knowing you’re at peace,
We’ll keep you in our heart,
And ours with you
Until we meet again,
My special friend.


May you rest in peace.

Chapter 4
Pieces of Her Mind 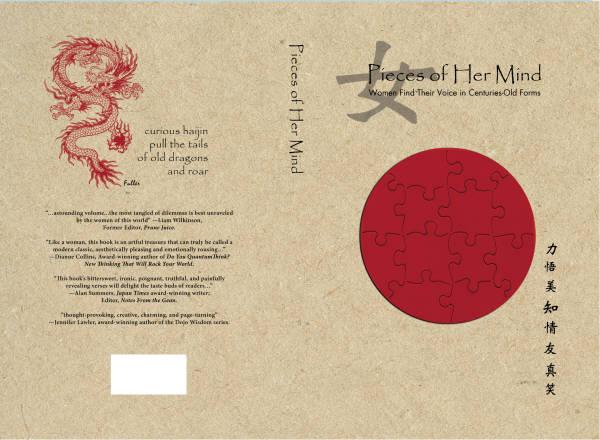 It is with sorrow that I hear
another friend has passed
into the realms of golden thought
where all must go at last;
a poet who is well defined
by poems I was glad to find
endure in Pieces of Her Mind,
a volume unsurpassed. 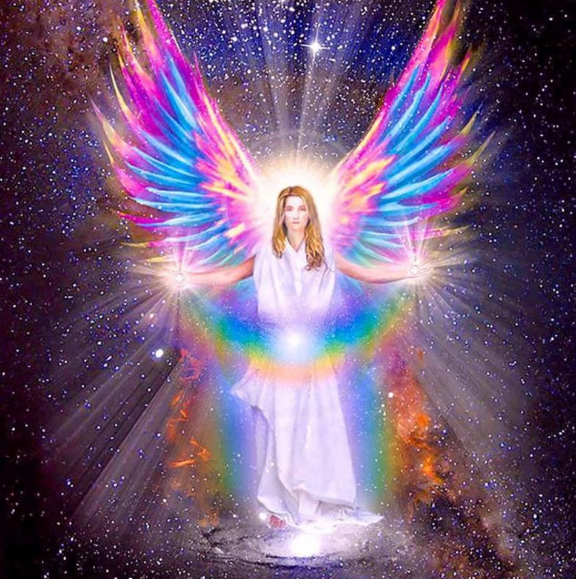 Life in the clouds

Where the sadness stops

A new life begins among the Angels. 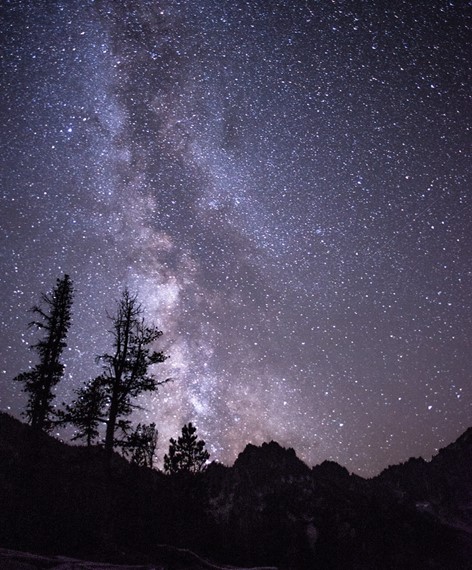 She seemed refined and elegant to me,
a lady -- much like one I'd known as mother.
She sailed the world and shared in poetry,
the wonders she observed, and like no other,

her helpful words would wrap around my own
and give support to what I'd tried to say.
She was so wise and beautiful, our Joan,
a gift we could look forward to each day.

But on a Monday, bleak with tears and rain,
she sailed, one final time, across the sea,
beyond this weary world of grief and pain.
Her new adventure -- God's eternity.

She shined so warmly here, but this we know ...
the heavens' stars are brightened by her glow.

Chapter 7
A Tribute to Joan.

It is with a heavy heart, that I've just found out that Joan has passed away.

I read her lovely poems with great joy, and she never failed to write me a constructive review up until recently.
I have to to say that I feel guilty that I never knew how ill she was. She never let on. So how could I know?

All I want is to pass on my condolences to her nearest and dearest. I also want to let them know that her writing gave me great joy, and equally, her faithful reviews were not only constructive, but so full of great advise. I always looked forward to them.

May you rest in piece, Joan

Joan enriched everyone with whom she spoke and everything within her reach. A mentor to young aspiring poets, musicians, and students. She was a patron of the arts and shared the beauty of music, paintings, sculpture, and so much more with those of us not as traveled or well versed.  As an educator she knew that all people, regardless of age, must continue to learn, and so she was always teaching even when being creative.

despite the darkness
owl continues to inspire
renaissance woman
remains in the hearts and
memory of all whom she touched
-Ray Griffin, 30 January 2021 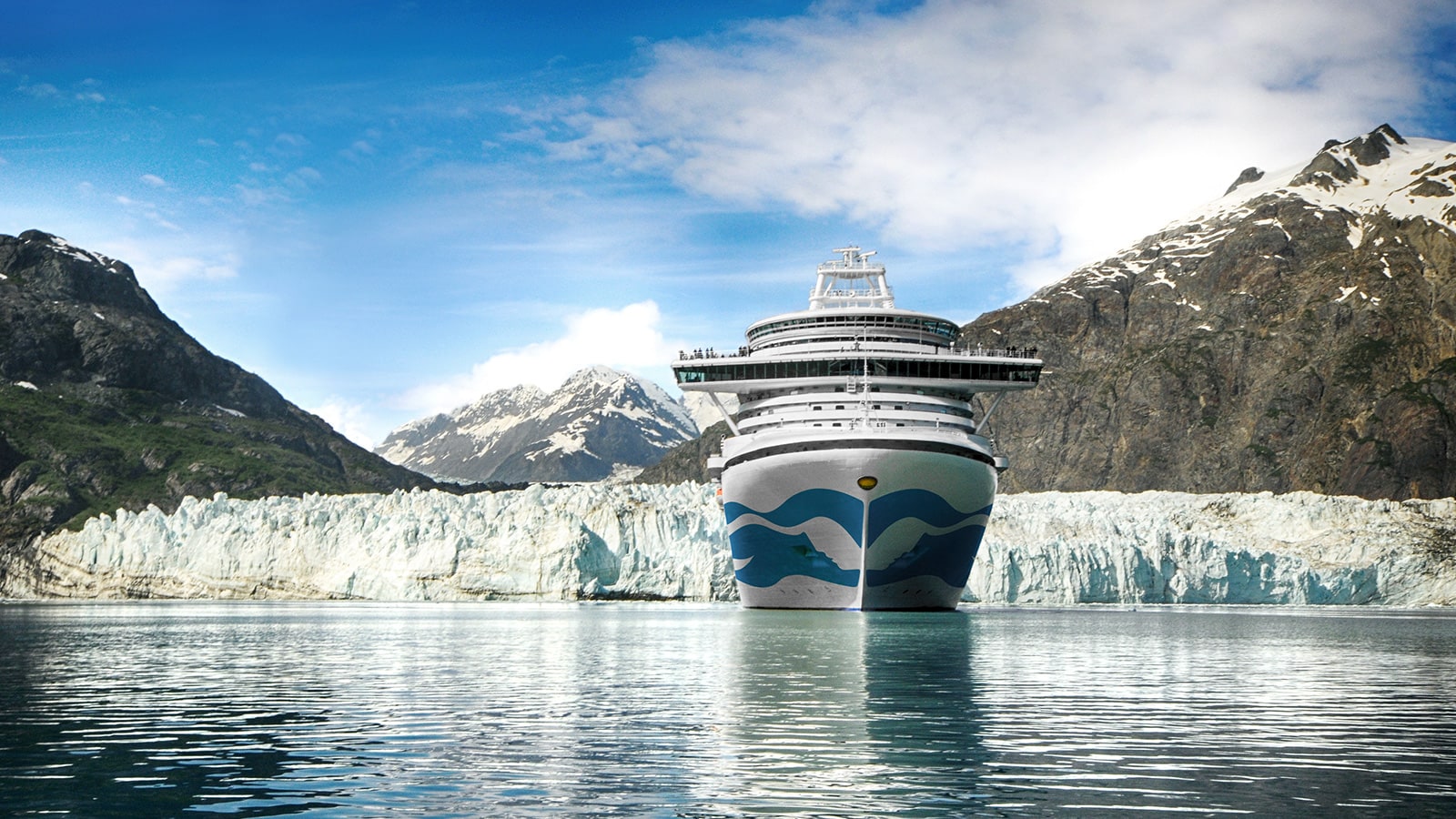 
JoanE and her husband loved to travel
Michael (reconciled) called her Highway
made her smile
she would take these amazing pictures,
and post them on here
through the pictures I would go on,
what was called our Fanstory fantasy cruises
Joan would let me know where they were going
and I would pack my fantasy suitcase
one of my favorites was Alaska
upon coming back
Joan would tell me about each of the pictures
I loved our trips,
and am going to miss her so very much
my heart is broken,
but I know for her
this is not the end, this is just the beginning

my heart and my prayers
go out to all her family and friends,
and loved ones left behind
she now rests in peace
love you my sweet friend...Linda xxoo 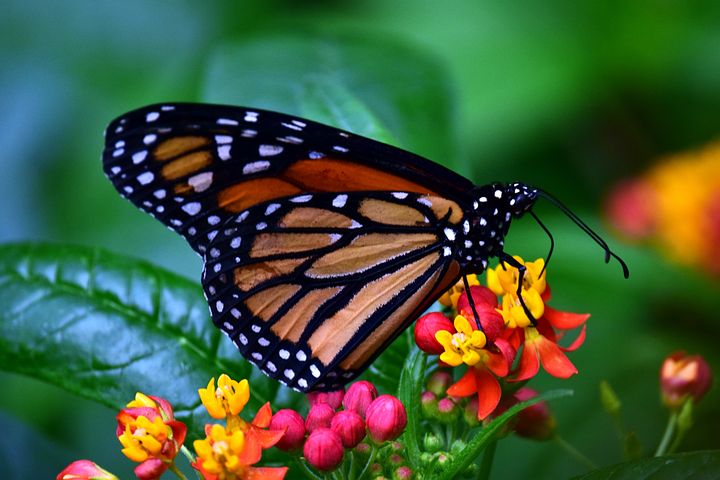 A lovely Monarch fluttered by

Made me smile and stayed awhile

Butterfly kisses upon my soul

Left without a proper goodbye

How I will miss that butterfly....

She traveled a lifetime; her lines soared in the air, land, and sea.

She wrote of oceans, mountains, meadows;

and now she is cruising that infinite heaven.

Oh what beautiful descriptions she could write.

In the past, reading her lines, I traveled with her,

and, looking out my window, breathing in the wide space,

I started seeing what she was seeing…

the beauty of her words tumbled through my mind,

Holding my breath, I heard the roar of her pen.

Now, free of pain, she will travel for an eternity. 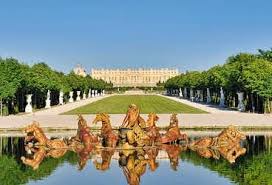 Today I learned that you have left us all -
through earth's perimeter, into the clouds.
You were a true fine lady who stood tall
against the odds of life and judging crowds.

So poised, aristocratic all the time,
you have exuded wisdom and finesse ~
We met eons ago in the world of rhyme
and I admired your distinction and largesse.

I cherished your reviews - they were so kind,
so polished, and they always made you grow.
You had a learned and and expanded mind
and shining was your artistry halo.

Why did you have to go? A cruel twist of fate -
This site is orphaned now, we lost its star.
Good bye, my friend, we'll meet across the gate,
your presence and your luminance are never far...

Chapter 13
Only the Beginning 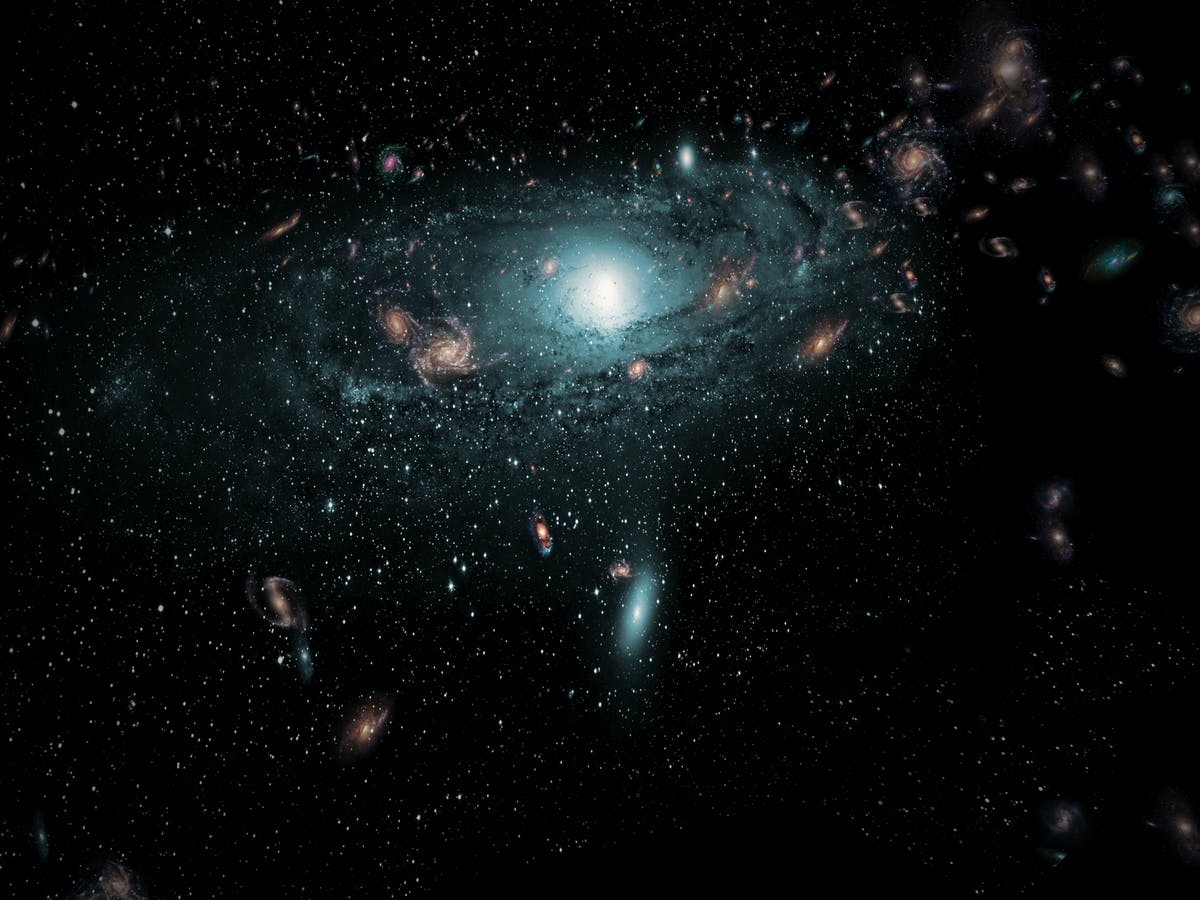 I wonder ...
what landscape are you painting now?
what galaxy are you cruising?
what dream-textured words are you using
to compose the essence of your poems?

I believe
no matter your doubts about the Beyond
from Earth’s murky view
that you have found that
ce n’est pas la fin, ma chère amie,
ce n’est que le début

(it’s not the end, my dear friend, it’s just the beginning) 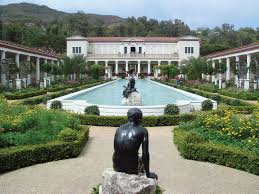 Certain people are blessed with purposeful, adventurous lives dotted with fascinating experiences, moments with intriguing individuals, and visits to intoxicating locations the rest of us can only dream of.  But.  If we're really, really lucky, in the best of cases--like with Joan Stern--sometimes these people have the desire and the skill to share these adventures and their growing insights with friends through vivid and remarkable word pictures.

Joan's writing career had a somewhat less-than-auspicious beginning.  In a 2010 FanStory post, she relates the creation of her first poem, a simple piece that accompanied a butcher-paper mural about Henry Hudson assigned by a fourth-grade teacher.

She doesn't really say what she thought of that effort but seems to have turned instead toward a challenging career in Public Administration and Business Consulting for the next five decades.  It isn't surprising to learn she worked with the Getty Museum in Los Angeles, California, and had a high appreciation for the arts, attending plays, concerts, and museum events with her husband, Bob.

good ending--
too bad it didn't start
sooner in the play
-Joan S, Pieces of Her Mind Anthology, 2012

Joan's writing career began actively around age 65, after retirement, when she took six summer classes for seniors, one of which was Creative Writing.  Her first effort, another poem, was published in a local paper and nudged her toward the fact that she really did have talent.  Taking her teacher's advice, she began to write daily.  Joan loved senryu, a tricky Japanese-short form of poetry because it demands brevity and succinctness.

She was a popular poet on FanStory, but quietly and without fanfare, had multiple pieces published in anthologies and elsewhere. Joan often read her work at venues in the greater Los Angeles area, and when she did so in San Francisco and South Korea, she garnered the title of Poet Laureate for The Global Forum on Direct Democracy.

In stories shared here, she explains she originally thought her whole identity was tied to her professional career.  I have to assume the idea of retirement probably scared her.  But later, she admitted, "Who knew that at age sixty-five, I would find an entirely new identity?"

Aren't we so glad she did?