My first attempt at making a home made dessert 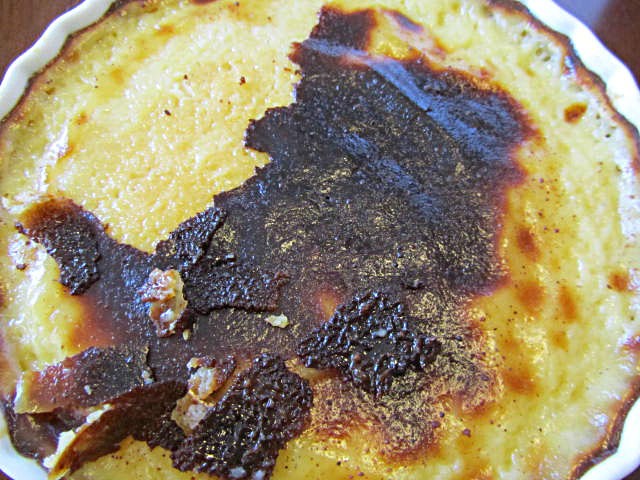 We were married. I was delighted to show off my culinary skills and consulted my brand new copy of "The Green and Gold Cookbook" for a recipe for a dessert to complement the roast dinner I cooked in the brand new electric frypan.

I found a recipe for "Elizabeth Apple Pudding" and got busy. I turned the oven on and placed the pudding in to cook.
About fifteen minutes later I was recalled to the kitchen when an unexpected smell of burning heralded that all was not well.
The thermostat in the oven was too high and my dessert was burnt on the top.
So, I turned the oven off and wondered what to do next.
Then-- inspiration!! I plugged the frypan in and turned it on to maximum.
Then, I scraped all the charred bits off the pudding and put it in the frypan to cook.

The frypan had a glass lid through which I could see the pudding cooking.
"Hooray", I thought, "We'll have our dessert after all" and got on with some ironing.

About a half an hour later I heard a clinking sound coming from the kitchen.
The pudding had grown in size with the added heat and was now gently lifting the lid off the frypan as it attempted to complete its destiny.
The half-cooked portion had been pushed aside and the remaining uncooked part thrust itself through the gap, lifting the glass lid and then subsiding.
My husband suggested that I make a custard and we'd have it for tea that night. So we did.
The first course, carefully tended over saucepans of boiling water, was very satisfactory.

Then came dessert. The custard was alright, but the pudding!!!
It was like cement and although we attempted to eat it in very small mouthfuls, it wasn't fit for human consumption.
My husband (gallant to the core) very bravely tried pouring some apple juice over it to make it easier to digest, but even that failed abysmally.
We referred to that dessert as "Thud Pudding" and after that whenever some young bride confided in me of some culinary disaster, I"d tell her about the night we had Thud Pudding for dessert.
.When I finally got someone out to check the oven it was a good 75 degrees higher than it should have been, but once it was adjusted there were no more problems and I learned to cook almost anything with the Green and Gold Cookbook to refer to.

I still have that copy of the G&G although now it is in pieces and has been reprinted many times since the year I first purchased it in 1963, the year I was married.

The pudding was quite indigestible, and after the first couple of mouthfuls, we put it aside. We made jokes about it, saying how it went down slowly and landed WITH A THUD. so after that, we called it "Thud Pudding"
Pays one point and 2 member cents.