She is an accomplished novelist and is currently at the #9 spot on the rankings. 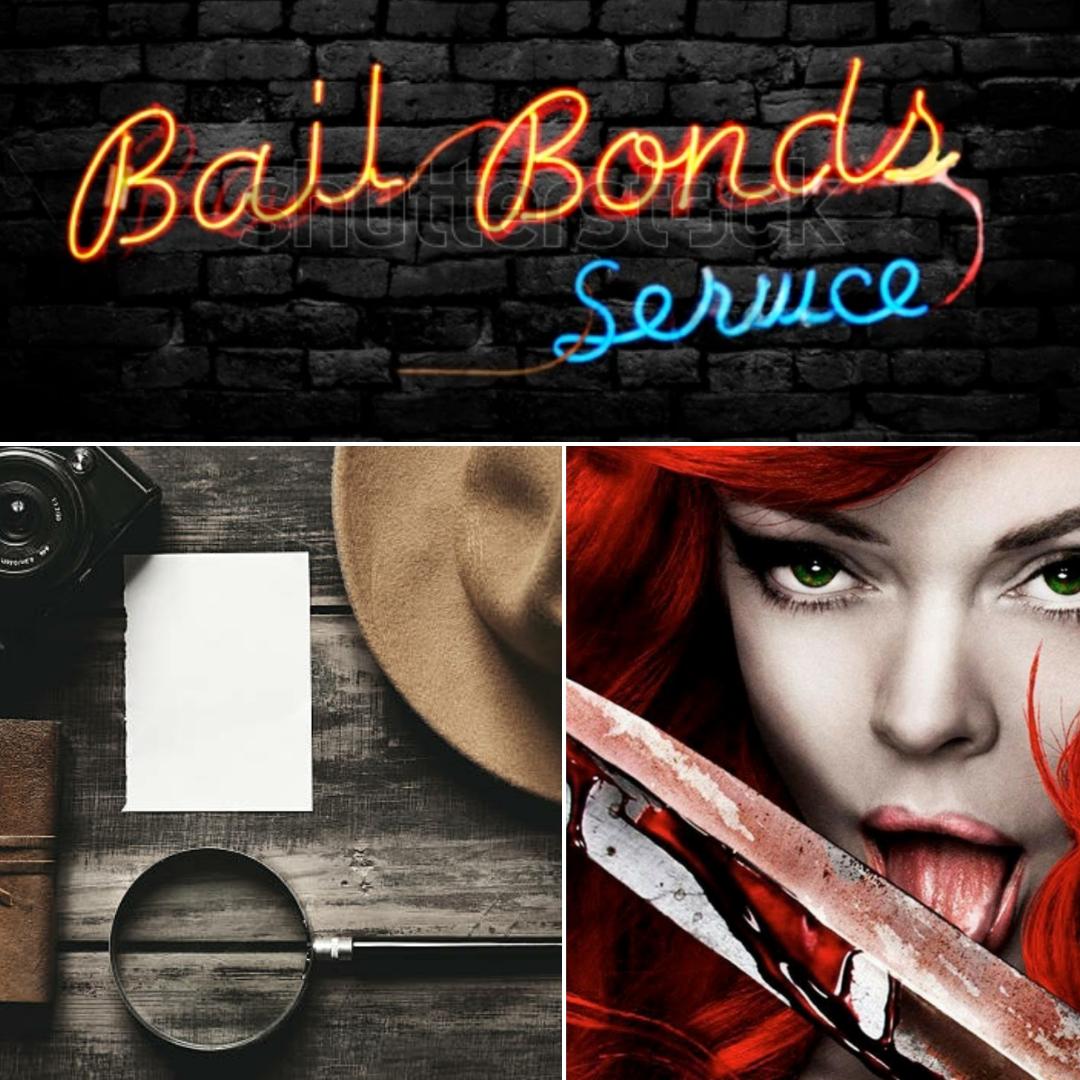 The moment Detectives Manuel Sanchez and Frank Perkins arrived at Bad Boy Bails, they didn’t waste time as they hurried inside and asked the receptionist to speak with the owner.

She gestured toward the seating area and said, “Make yourselves comfortable, Detectives. He’s with a client, but I’ll let him know you’re here.”

Frank gave her a polite smile and nodded. When he sat down, he reached toward the stack of magazines lying on the table next to his chair. Manuel, on the other hand, remained on his feet with his arms crossed and a frown marring his face.

When the receptionist returned, she sat behind her desk and purposely met Frank’s eyes with a half-lidded, smoky desire so he’d know what she was thinking about. Or rather who. Hell, she was practically undressing him with her eyes.

Frank was an old-fashioned guy, and he wasn't used to another woman’s attention besides his wife's, so it didn't take long for his face turn three shades of red. In response to the receptionist's obvious flirtation, he quickly looked down at the magazine he had in his hand and started flipping through the pages.

Manuel was oblivious to what had transpired, too pissed over having to wait. Patience was not one of his strongest characteristics. Not even on his best day.

Thirty minutes later, they were still waiting. Frank glanced up at his partner, lifting one eyebrow as he checked his watch. Manuel shook his head, appearing as though he was a breath away from barging into the owner’s office and choking the life right out of the SOB.

Every now and then, Frank caught his partner’s eye—who was steaming at this point, looking as though he’d swallowed a lemon—and gave him a shake of his head and mouthed “Patience,” praying Manuel would cool down before he took matters into his own hands.

Just as Manuel opened his mouth, preparing to say something to the receptionist—a smartass remark, no doubt—a tall man with a dark goatee came into the waiting area and greeted them. “Sorry to keep you waiting, Detectives. Welcome to Bad Boy Bails.” He extended his hand to Manuel. “What can I help you with?”

Manuel ignored the guy’s outstretched hand and cut to the chase. “Are you Sam Michaels?”

The guy smirked and lowered his hand. “Yes. I’m the owner. Is there some kind of problem?”

Before Manuel got the chance to reply, Frank shot over and extended his hand. “I’m Detective Perkins and this is my partner, Detective Sanchez.”

When Sam took hold of his hand, Frank went on to say, “Is there some place private where we can talk, Mr. Michaels?”

“Uh, sure.” Sam pulled his hand away and directed them toward his office. “Please… right this way, Detectives.”

As soon as Sam ushered them inside, he motioned toward the empty chairs across from his desk. “Please, make yourselves comfortable. Would either of you care for a cup of coffee?”

Manuel waved it off with a shake of his head, refusing his offer and Frank said, “I’m good. Thank you.”

“Suit yourselves,” Sam replied as he poured himself a cup and then plopped down in his oversized chair. After he took a slow, careful sip, he leaned forward and rested his elbows on top of his desk. “So, tell me, gentlemen.” He cocked a brow. “What brings you two here? Got someone you need tracked down? I’ll assure you. We’re good at what we do.”

“I’m sure you are,” Manuel commented. “We’re here to ask you a few questions. And of course, this is off the record.”

“Your former employees, Karina and Kian Adams,” Manuel continued. “Can you tell me the last time you had contact with either one?”

“They’re both connected to a kidnapping which occurred late this morning,” Manuel said. “We’ve got a witness who identified them. They confronted the female victim outside Parkside Café. You know, the one at Stinson Beach.”

When Sam nodded, Manuel went to say, “Well, it soon escalated into a physical confrontation. And believe it or not, the victim rendered both women unconscious. Soon after, two men, who we later discovered as Adrian Garcia and Maximum Pierce, sedated the young woman and took her by force.”

“Sorry to hear that,” Sam said, stiffening in his chair. “But… like I said, I haven’t seen the Adam twins in a few years. I had to let them go after they got into some trouble and lost their license.”

“What about the two guys,” Frank chimed in. “Have you ever heard of them?”

“Can’t say I have.” Sam shrugged. “I wish I could be more helpful.”

“Oh, I think you can,” Manuel said in a smug tone.

“Have you heard of a pharmaceutical company called Adam & Eve?”

“Correct me if I’m wrong,” Manuel went on. “Your brother, Henry… he’s the head physician there, right?”

“So?” Sam looked at Manuel frustrated. “What’s my brother have to do with anything?”

“Adam & Eve Pharmaceuticals is under an investigation. We have reason to believe they’re linked to a mental institute who has been recently shut down for performing illegal experimentations on their patients along with kidnapping charges. One of the physicians there gave us some incriminating information that connects the research to A&E. Going by the files we found, they were paying the institute.”

“Are you saying my brother is involved with all this?”

Manuel rose to his feet. “Cut the innocent act, Mr. Michaels. We know you’re somehow linked to those Adam twins and the kidnapping. I’m thinking you gave your brother their contact information so he could hire them to track down the victim.”

“You don’t have jack shit on me,” Sam said, glaring at Manuel.

“Maybe not with the kidnapping,” Frank interjected. “But we do have some interesting footage of some of your so-called bondsmen.”

Sam shot out of his chair. “What the hell is this… some kind of threat?”

“Calm down, Mr. Michaels.” Frank held up a halting hand. “We’re just trying to find a missing woman. And time is of the essence. But remember… this is all off the record. You coorperate with us, and I’m sure we can come up with a solution before your business gets shut down.”

“What do you mean shut down?” Sam demanded, pointing at what looked to be a flash drive in Frank’s hand. “What the hell is on that?”

“We know about your illegal employees, dumbass,” Manuel blurted. “And I know a judge that would love nothing more than to shut this shit down. You feel me?”

Sam huffed. “All right, all right. But I had nothing to do with that woman getting kidnapped. All I did was give my brother Karina and Kian’s last known contact info. Henry told me he was trying to track down a former colleague of his. He said the guy owed him money. When I offered him my help, he flat out refused, saying he preferred the Adam twins. I told him they didn’t work for me anymore, and hadn’t in over two years, but he insisted, so I gave him the information in the files I kept on them. I had no idea they were even still living here. Hell… last I heard, those two fled the country.”

“Are you sure that’s all you know?” Manuel pinned Sam with an inquisitive stare. “Something tells me you’re not giving us everything.”

“Okay.” Manuel slowly nodded. “But if we find out you’re holding back anything that could be crucial in finding our missing girl, I’ll personally deliver that flash drive to Judge Weaver myself. And just so you know, solving this case is high on her list. Besides, in your type of business, I’m sure you know her reputation quite well. She’s not the type of judge that shows much leniency when it comes to criminals or illegal immigrants.”

“Yeah,” Sam reluctantly said. “I get your meaning.”

Before the two detectives walked out the door, Manuel turned to say, “From here on, make sure your business stays on the up-and-up. If I find out you’re still breaking the law, you’ll be in the hot seat with Judge Weaver. Do I make myself clear?”

“I hear you, Detective.” Sam narrowed his eyes. “Loud and clear.”


A reference for terms and cast of characters in this chapter, especially for new readers:

BREEDLINE COVENANT - The Breedline species must live within the boundaries of their Covenant. There is one in every state. A council governs its laws and oversees the species population.

Detective Manuel Sanchez - He is a homicide detective at the San Francisco Police Department who late discovers he carries the Breedline genetics. His partner is Detective Frank Perkins. His sister is Lailah.

Detective Frank Perkins - He is Manuel Sanchez's partner and discovers the secret world of the Breedline. Born as a human, Frank pledges his loyalty to the Breedline. Fighting alongside his partner, they take an oath to help the Breedline protect the world from corruption and unknown creatures that prey on the innocent.

scongrove has granted FanStory.com, its affiliates and its syndicates non-exclusive rights to display this work.