Duane Culbertson is a citizen of the universe.
He respects all things natural.
By day a scientist, by night a passionate writer.
His nocturnal scribblings bring him great joy,
a joy he hopes to share with others.
[Please visit www - more...

He is an accomplished novelist and is currently at the #8 spot on the rankings.

A Filthy Assassin encounters trouble of his own 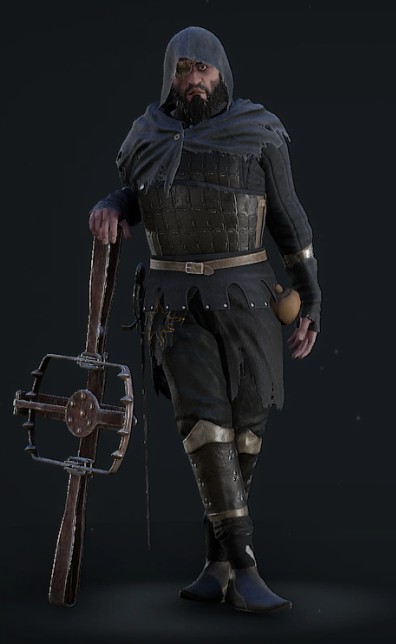 Curtis Hagstrom smiled. Everything had gone according to his plan. It was unfortunate he had to betray so many friends, but he could always make more. He was destined for greatness, and this belief empowered him to commit terrible acts, villainous deeds he would have once never considered, but which now he had come to relish with perverse amusement. The truth was, he enjoyed being Evil; it made him feel powerful.


Having spent weeks in these tunnels, he’d cultivated the peculiar ability of being able to see in near total darkness. He'd invested countless hours charting the area, and now it had finally paid off. His extensive knowledge of the sewers, mines, and gangland territory had proven priceless.

Curtis first contacted Antonio Gitano weeks ago when the foreign gang settled the outskirts of the Devil’s Den. Curtis described the weaknesses in the Astaphan perimeter, and the immigrants wasted no time murdering the rival gang. Only a half dozen managed to survive, holed up in a cave by the mining docks, but it mattered little to Curtis, for they knew not who had betrayed them.

His favorable, initial interactions with the Gitano prompted further dealings, and when Curtis suggested betraying his own gang, Antonio was not as skeptical as one might expect; for, had this resourceful man not already helped them acquire a foothold in Malden?

As he walked, Curtis wore an evil smile, a product born of his perfidious nature. He found it amusing that he had managed to outsmart three rival gangs by playing them against each other. In truth, he felt loyalty to none of the gangs, as he had a far greater purpose. He was an officer of the Bloated Corpse, and his allegiance lay with the Pestilent One. The Time of Trials had started, and the Grandmaster had entrusted him with an important mission, the opportunity of a lifetime. If he succeeded, and now it looked inevitable, he would be exalted in the eyes of his peers, his name synonymous with greatness. Perhaps one day he would be as famous as his master, the man who was more than a man.

Curtis could not wait to bring the stone to the Grandmaster; he would look him in his fiery red eyes and declare victory. He had triumphed. He had not failed the one who had procured the phony documents enabling him to assimilate into a society that regarded newcomers with the utmost mistrust and suspicion.

Curtis walked along the narrow ledge of the sewer. He had no concerns of slipping. He was young, strong, and agile, and he carried with him the hope of a better life. Nothing could go wrong.

He glanced down at his feet. They would soon get wet with the incoming tide. Now that the moon had nearly doubled in size everything was crazy and unpredictable. The ocean currents had become brutal in the past few months. He knew if he were swept out to sea, he may never get back. Dawn approached. He would have to increase his pace.

His thoughts returned to the jeweler. He had liked Benvollio. And he had a feeling the man would probably have followed him anywhere. He never wanted to kill him. It was just the direction the wind had blown. Fate can be cruel.

Rumored to be some safety measure, the jeweler had been instructed to build an elaborate enclosure for the stone, and the work had been done in Antonio's private chambers under his watchful eyes. By breaking one of his only rules, Curtis had brought the jeweler into his confidence. He told him he planned to steal the gem and said he would split the profits. Greed, and perhaps love, had surpassed loyalty. Benvollio furnished Curtis with the information required. He knew when the Chief would be in his quarters. And he also knew the combination to the safe where the real stone would be kept.

Curtis knew his entire plan depended upon the Gitano successfully stealing the stone from the Geheimschen, a gamble that paid off. The raid had gone smoothly. It helped that he had unlocked all the doors and told them when to attack.

During the day Curtis had widened the hole through the floor-boards beneath Antonio’s bed. In the evening he returned and killed the man as he slept, slicing the blade below the vocal chords to make sure no sounds would alert the sentry outside.

Benvollio smiled when he looked up from his desk and saw Curtis instead of the Chief opening the bedroom door. He told his fellow conspirator he was ready to leave. But Curtis had other ideas.

“It’s done, my friend,” Curtis said. “We can leave now, but first, let’s drink to our good fortune. I know there is some fine Romaanian wine here.”

Curtis walked to the cabinet and produced two glasses. With his back turned he placed a few drops from a vial into the glass he offered his accomplice. Meanwhile, Benvollio had picked up his second finished forgery and was admiring his handiwork. He took the offered glass.

“To success,” Curtis toasted. He downed the glass in one gulp. The jeweler followed his lead.

“This has a strange bite to it,” he commented. “I don’t think I like the finish.”

"Yes, I believe it's an unusual vintage,” Curtis said with a smile.

A few heartbeats later, Benvollio fainted. Curtis caught him as he fell and rolled him upon his back. The jeweler’s eyes held a look of sadness and betrayal. He was aware of his surroundings, yet unable to move.

“I’m sorry, my friend,” Curtis began. “Antonio would not work for my purpose. His body is too thick. It would take hours to cut through all that tissue, and I only have this small blade.”

“I was instructed to take a fresh heart,” Curtis continued. “I’ll try to be quick.”

Very messy, it had been. Dried blood still caked his hands. He had not bothered to pry open Benvollio’s fingers for the forgery, since he already had the real stone and harbored much loftier goals than simple financial gain.

Curtis scurried along the passage. He did not want to keep his master waiting. It had been stressed that time was of the utmost importance, so he hurried as swiftly as possible.

Curtis felt exhilarated and overjoyed. Even the foul air of the sewers smelled sweet at that moment. He breathed deeply, as if to celebrate that he was alive. His master had taught him many lessons. As he walked, he recalled a few:

Destroy the head of an organization and you cause anarchy and fear. Your escape becomes more probable, retribution less likely. Curtis heard the words in his head as if they’d been spoken beside him. They were his master’s words. His idea to leave behind the forgery was his master’s influence as well. Heed not the periphery. Let nothing distract you from your objective. Nevertheless, the imparted wisdom had not stopped him from taking a purse of gold from the safe, for old habits are hard to break.

Fear and greed – the emotions that drove mankind. Money could motivate people to do almost anything. But this approach to personal gain was shortsighted. What Curtis wanted was power. Power can make money irrelevant.

The thought reminded him of the stranger he met on the previous day, an odd, roguish fellow. Curiously dressed, the man possessed an innate charm that was hard to resist. He offered an absurd amount of money for the stone, and even promised him sex slaves to do his every bidding upon completing the task. Curtis managed to escape his grasp, melting into the crowd milling about the Thieves’ Guild, but the incident left him troubled. What manner of man held such powers that he could charm others into doing whatever he asked? He thought of reporting the incident back to Sebaycian but decided against it. His master had far more important things to consider.

A tingling sensation seized his attention. He looked down and noticed emerald scales crawling across his hand.

The legends are true!

Curtis rejoiced! He had hoped carrying the stone would grant him some of its power, and it appeared his theory was true. He had deliberately held the stone in his hand while walking the entire time. A euphoria elevated his spirits and renewed vigor coursed through his veins.

A blessing! A blessing from the Great One!

Curtis wrapped the stone in his white cravat and tied it firmly about his neck.

With the stone so close, I am bound to gain even more power. Perhaps I will become more powerful than my master!

A curious noise interrupted his thoughts. It sounded like pebbles falling… a lot of pebbles falling. A wind blew from behind, and, not certain why, he adopted a faster pace. He knew not what the noises were, but he shuddered as if moved by some primal instinct.

The foreboding sounds drew nearer, despite the elevated speed he now entertained.

Fear gave way to terror. Discarding the last vestiges of self-control, he fled as if pursued by some horrible beast. Sprinting down the passage, he no longer knew where he was. The path bifurcated. He threw up his hands in exasperation and randomly chose the tunnel to his right. To his horror, whatever approached continued to follow. Frantically, he groped for side passages. Somewhere to hide. Nothing. No options. No choice but to continue his chaotic flight.

In abject terror he ran, no longer a thinking creature. His survival instincts took over, rational thought crowded out of awareness by the vague dread and fervent belief that he must somehow keep moving. His legs burned. His lungs greedily drank the foul air of the sewer, yet he pushed onwards.

The terrain grew rough. Careless of stumbling, he continued his perilous flight through the darkness. With nowhere to hide, he no longer only heard noises; he felt them. They were everywhere. And with terrible certainty, he realized the horrible truth … They were coming for him!


© Copyright 2021. duaneculbertson All rights reserved.
duaneculbertson has granted FanStory.com, its affiliates and its syndicates non-exclusive rights to display this work.
Copyright © 2000 - 2021 FanStory.com. All rights reserved. Terms under which this service is provided to you. Our privacy statement.
top
You Have No Rank
Share 4 posts to be ranked.