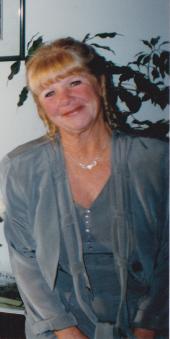 Gayle started on Fan Story in 2005 when she began writing her first novel Secret Lives. She would be the first - more...

There was a knock at the door.

They'd been waiting for this moment for the better part of the day, all players well-rehearsed and at their appropriate stations. They'd only get to do this once. A second round was highly unlikely.

Sam peered through the peephole, stood back and turned toward Peggy. He mouthed the words 'Are you ready?' and when she nodded, he stared down the dark hall where Jim and Lenny waited, guns already drawn. He turned back to the door as the knocking came again.

"Just a minute, please." He cast an agonized glance over his shoulder, flipped the lock and stood back just in time.

Dennis barreled through the door, driving the knob into the wall behind it. In one swift move, he slammed it shut and made a grab for Sam, knocking him onto the sofa with one punch. The second sent Sam crumpling to the floor, on the edge of consciousness.

Dennis stared at Peggy, grinning, hands clenching into fists. In a flash, he pulled the knife from his pocket, chuckling, savoring the moment. He hit the button and the blade shot from the front of the stiletto, quick, efficient and deadly; ten inches of lethal intent.

He took several steps toward Peggy, strange chittering noises escaping his mouth as he closed the distance between them. Dennis paused a moment then, listening to another sound similar to his, but different somehow.

Out the corner of his eye, he caught sight of Bella creeping down the hall towards him. Lips drawn back in a hideous grimace, every tooth in her head showing, the huge dog moved toward him, quickening her pace when she realized he saw her.

Dennis shifted his attention from Peggy to the dog and grinned wider. He rose on the balls of his feet and extended his arms above his head, his already huge body expanding, enlarging his appearance much like a cat when it prepares for battle.

Poised for combat, Dennis hissed at the stalking dog, trying to intimidate her. Ferocious growls escaped Bella's throat as she lowered her head in preparation.

Peggy snapped her fingers and Bella launched, hitting him square in the side, knocking the knife to the floor. He staggered backward, but maintained his feet.

Dennis grabbed for the dog as she jumped again, securing a strangle-hold on the collar around her neck, holding her in front of him. Bella's legs worked like pistons as she shredded his shirt with her claws, drawing blood with her sharp nails.

Her snarls changed to gurgles as his fingers tightened on her windpipe. Just then another blow, this one in the middle of his back, sent the fat man sprawling. He released his hold on Bella, arms flailing for balance, and landed on his stomach with a heavy thud. He flipped over on his back with amazing speed for one of his size, but Tony was quicker.

He stood above Dennis, one foot on his chest, fangs bared, his teeth snapping in rapid succession, not an inch from Dennis's nose. Another pair of ferocious eyes bored into Dennis as Bella joined the fray.

Unlike the many other times over the years that Tony had taken down a perp this way, Dennis had no fear. He reared back and drove his fist into Tony's face, knocking the stunned dog backward.

Never one to shy away from a fight, Dennis lurched to the side and smashed Bella in the head with his fist, stunning the dog and knocking her down. His arm shot out in a flash, reaching for his knife.

Peggy pointed her gun as Dennis got to one knee, took deadly aim and shot him between the eyes.

Dennis collapsed onto the rug in a spray of blood, bone and tissue, eyes and mouth wide open.


"Good God Almighty, if I hadn't seen it myself, I wouldn't have believed it!" Jim turned to Lenny, hands wide. "He punched them, both of them. I mean, Tony's getting on in years, might be a bit off his game, but Bella? He picked her up and almost throttled her. Damn that collar." He hurried across the room to Tony's side, where the dog continued to work his mouth.

"Son of a bitch, I think his jaw is broken!" Jim knelt at the dog's side, gentle fingers stroking, probing the sides of his sleek muzzle while he praised Tony for his brave and wonderful performance.

"Oh, my God, Bella," Peggy said, cuddling the dog to her chest, staring at the blood dripping from her nose. She pulled several tissues from the box on the table and began patting at the dog's lip.


There was a pounding at the door accompanied by shouts from the hotel security team demanding access to the room. Lenny helped Sam to his feet and then opened the door. He stared at the lead man and nodded, moving aside. "You're just in time to pick up what's left of the LA Carver."

"The LA Carver?" he said, eyes wide. He holstered his gun and took the card Lenny extended to him, scanning it quickly.

"I'm Lenny Browning, formerly chief homicide detective, LAPD, presently partner in the private investigation firm of Sessions and Browning. My colleague and I are here on behalf of Peggy Packard, the intended victim in this case. We were present when that man burst through the door and attacked another man and both our dogs." He hitched his thumb over his shoulder at the corpse.

Lenny and the lead, whose name was Murray, moved aside as the remainder of the team poured through the door. One man waited in the hall, talking on his cell and informing hotel management of the shooting. Next he called the LVPD, giving them the room number where the shooting occurred.

Within a matter of moments, a reporter for one of the local TV stations, cameraman in tow, arrived at the suite. She nodded at the camera, licked her lips and assumed a properly solemn face.

"KTLV is interrupting its regularly scheduled programming to bring you this live update from the Bellagio hotel. Moments ago it was the scene of a fatal shooting. We're waiting for confirmation, but word has it that the LA Carver has been shot and killed in the commission of a break-in and attempted murder of Peggy Packard, a Los Angeles resident who was visiting Vegas for the Christmas holidays. There are no other details at this time, but we expect to see a representative of the LVPD here shortly for a full statement."

Three of Las Vegas's finest emerged from the elevator. A man in a dark gray suit followed them and as they approached the room, he unbuttoned his jacket. The officers unhooked the leather keepers on their holsters, ready for whatever.

Detective Hammer stepped into the room, staring in disbelief at what was happening to his crime scene. "What is this, a convention? Don't anybody move."

Frankie sat in the living room of her Vegas condo, a half-eaten apple in one hand, a glass of Tanqueray in the other.

She watched the woman in stunned disbelief, listening as she described the death of her brother, the LA Carver. Her foot began to tap uncontrollably while her heart pounded a staccato beat in her chest.

'That miserable fuckin' bitch! She killed my brother...my poor Denny.'

She clenched her teeth, causing such pain in her jaw that she cried out. Knocking back the remaining gin, she rose unsteadily, still in a state of shock, and poured another. She stuffed the apple into the garbage disposal and flipped the switch. The grinding sounds further fueled her fury and she screamed.

'You have a good fuckin' holiday, Peggy, have a lot of fun. It'll be your last chance because when you get home, I'll be there waiting for you. I'll make you sorry you were ever born, just wait and see! When I get done with you, you and that stinkin' mutt, you'll both be sorry.'


© Copyright 2021. Showboat All rights reserved.
Showboat has granted FanStory.com, its affiliates and its syndicates non-exclusive rights to display this work.


Wild Wind of Love
The joy of the Spirit that is like the wind can set us free.