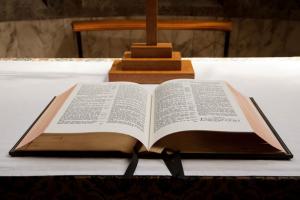 I have a problem. I don't believe you are real. That in itself is not such a problem, except for the fact that talking to people who aren't real is frowned upon by certain sectors of the medical fraternity.

Well, these spokespeople of yours are all well and good, except that by and large when nobody's looking, they don't behave in the slightest as they tell me I'm supposed to. It seems not a day goes by that one or another doesn't get caught with their pants around their ankles in the process of coveting their neighbour's wife, or getting fiddly with some little boy in the rectory. Or begging and pleading for more and more money to support their spreading of your "message" while they live the life of a jet-setting playboy. And why is it that so many of these God-fearing, Spirit-filled types (at least in your own specially chosen country— no, not Israel, the other one) think that the only way to bring about lasting peace is to arm everyone to the teeth?

But then, these very same people that are quite brilliant at delivering "the message", but really rather poor at following it, provide a solution— and lo-and-behold, it's a book! And then they tell me that if I only follow the instructions you provide in this book, I will have everything I need to live the life you want me to, and avoid being a reluctant guest of honour at a never-ending barbeque where I'm the main course.

Here's the thing, God. This book that you gave us— it's odd. The people I see on my television every Sunday tell me that it contains your message of love and hope and salvation. Well, I've read the thing many times, and to be honest, to me it seems to be all about hatred, intolerance, bigotry and revenge, with a few fluffy bits thrown in to ease the boredom.

According to this book, your grand plan is that you create a species (homo sapiens, or to use the slightly misogynistic term, "man"), giving him a free will. Then, when he exercises that free will in a certain way (which you knew he would do prior to creating him, because you are omniscient), you banish him from paradise and condemn him and every single one of his offspring who will ever be born to eternal damnation. Talk about a bad temper! Why would you create an entire species, knowing in advance the vast majority of them would be doomed to everlasting torment? That's just plain not very nice. Wouldn't you perhaps move on to plan B at that point? After all, you had an infinite number of possibilities at your disposal.

Then a bit later, we have more stories of how you wipe out the entire planet, or occasionally just a city here and there because you're not happy. Furthermore, the Old Testament seems to be little more than a catalogue of sins for which people should be murdered in the most barbaric way. Admittedly, many of these are totally horrendous sins, fully deserving of death— such as talking back to your parents, or working on the Sabbath. But really, isn't this a bit over the top?

It seems that your followers these days really have a hard time dealing with this book you provided. For most of the last few millennia, right up until very recently (say the last three or four hundred years or so) it has actually been acceptable practice to lop the heads off (or stone to death, or burn at the stake) people who don't accept or adhere to its teachings. Of course, in some places this is still de rigueur, but not in the majority of western nations. Indeed, in these dens of iniquity, all sorts of "atrocities" are becoming more and more accepted— including blasphemies such as believing that the Earth perhaps isn't flat, isn't the center of the universe, is a little more than 6,000 years old (ok, a lot more), and wasn't actually created in six days. Or believing that people should have the right to marry whomever they like.

And so, this places your followers in a bit of a dilemma. Clearly society has moved on a bit over the past 6,000 years or so. And if those who claim that this book is your inspired, infallible instruction manual for life continue to insist that every word is to be taken and applied literally, they find themselves at odds with the majority of society. And that isn't good for business.

But they can't just drop the book altogether, that would make the church look pretty silly. Also, we would be back to having no moral compass to guide us on life's journey. So what to do? Here is where we get really sneaky. And this is where the television show I was watching on Sunday night comes in, and in particular the appearance on it of one John G Stackhouse, Jr.

Mr Stackhouse seems like a pleasant enough man. He is a Canadian Christian apologist and scholar. And he has a theory which allows us to accept the teachings of the Bible, whilst not being required to do all those unsavory things it tells us to do— like stoning people to death for adultery (women only, of course), or homosexuality, or working on the Sabbath. You see, according to Mr Stackhouse, the Bible is a complex book. People spend years and years of study to unravel its mysteries. And, just as people wouldn't dare criticize any scientific theory without spending years swotting up on it (oh no, that would never happen), similarly people can't claim to be able to find fault with the Bible unless they have spent many years being professionally trained to understand it. Brilliant! This solves the problem of the Bible containing a lot of what would these days be considered balderdash, while still allowing people to believe in it. They just don't properly comprehend it! I should add, this theory is not the sole property of Mr Stackhouse; I have heard it espoused many times, he is just the latest proponent that I happen to have encountered.

Well, God, I'm sorry, but I just don't buy this line from your messenger one little bit. And there are two main reasons for this:

Firstly, is this the best you can do to encourage people to follow you, and be prepared to sacrifice their lives for you? In the past, you used to walk amongst humankind. And, if you weren't there in person, there were burning bushes or flaming chariots, or parting seas to bolster our belief. Even in New Testament times we had dead people coming back to life, water turning into wine and more. But for the past two thousand odd years, we've had nothing. Zilch. Zippo. Nada. That is unless you accept the stories of statues that bleed, and your Son's image in a piece of toast, and miraculously healing springs, which most of your own followers clearly do not, let alone the heathens. And in the face of all this absence of evidence, the one single, solitary thing you give to us —your book— is so complicated, so steeped in the savagery of tribal barbarians from thousands of years ago, that no one without a theology degree can fathom it. Surely if those who don't follow the instructions you have set down in that book are going to suffer eternal torment, you could provide us with something a bit better, a bit more comprehensible? Maybe beam down a "revised edition" at least?

Secondly, how is the position advocated by your Mr Stackhouse any different from the position of the Catholic Church throughout the dark ages? The entire movement known as the Reformation, which eventually led to every other branch of the Christian religion besides Catholocism, was aimed at taking your book out of the hands of "the illuminati" and putting it into the hands of the common people. John Wycliffe had the temerity to die before the Pope could get his hands on him, but he was subsequently exhumed and burned at the stake for his crimes of heresy— not least of which was translating portions of your book into English. William Tyndale was not so lucky. He was strangled and then burned at the stake for producing an English translation of your book. Why did he do it? So that individual followers would have your words in their own language to read, and wouldn't have to rely on so called "messengers" to tell them what your book meant! To say that your book is not suitable for reading by the common man, or woman, is to turn back the clock to the dark ages.

I'm sorry, God, but as far as I can see we are back to square one. Religious apologists can't have it both ways. Either you have provided the Bible as an instruction manual for following your grand plan, or you haven't. The arguments which modern theologians make for "cherry picking" the parts that suit them and ditching the rest just don't hold water. And since I choose to believe that you don't really want me to go around smiting and laying to waste and utterly destroying those who commit the litany of sins that are catalogued within that book, I just have to conclude that it is the work of men— primitive, barely out of the stone age men at that.

So, as much as it pains me to say, there is no magic book; no collection of popes and prophets and priests and prelates with whom I would trust my lunch money, let alone my life— this one or the next (if there were such a thing). And so I still have no reason to believe you exist.


This piece is, more than anything else, an experiment.

It was prompted (in part) by the appearance of Canadian theologian John G Stackhouse, Jr on the television program Q&A on 19th July 2015, and his response to a question from a young audience member.
Pays one point and 2 member cents.