Submission for Not a Flash in the Pan writing group 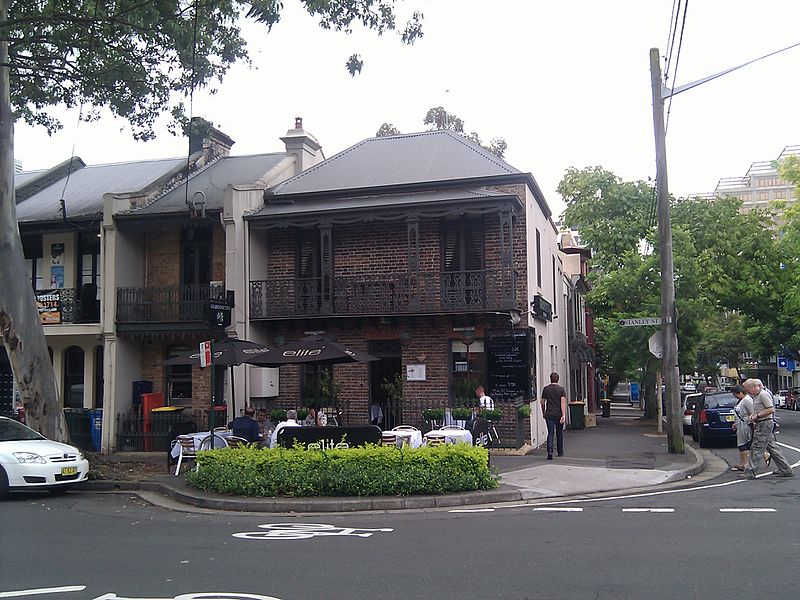 The dishevelled man plodded slowly along the Darlinghurst street. He didn't stop to look at the endless parade of terraced houses, some of which dated back almost to the days of the Rum Rebellion. His eyes firmly fixed on the ground, taking in the shimmering heat radiating from the concrete and the ubiquitous cockroaches scurrying hurriedly about their daily business. He paused for a moment, setting his plastic shopping bag down on the pavement. Ignoring the mocking taunts of the children in the house with the freshly-painted green balustrade, he withdrew a crumpled handkerchief from his pocket and wiped the perspiration from his brow. Repocketing the cloth, he picked up the shopping and continued on his way.

Con Stellios, the proprietor of the corner store from which the man had just purchased a loaf of bread, a litre of milk and the daily paper, wondered about the unkempt looking customer. With his unruly salt-and-pepper hair, his white stubble, and sun-bronzed face with its deep lines, he could be anywhere from mid-fifties to late-sixties. The shopkeeper was also intrigued at the man's ill-fitting suit that looked like it had been bought from the local Op Shop. It appeared totally out of place with the tattered white Adidas runners with the cracked blue stripes. In itself, not so unusual, but he couldn't help observing that the man drew a fat bundle of large-denomination notes from his pocket before peeling off a fifty to pay for his purchase.

A couple of houses before the corner, the man stopped and opened the wrought-iron gate of an unobtrusive-looking single-story property, making his way along the red concrete path and up the front steps onto the verandah. Removing the keys from his pocket, he opened the door and stepped inside. Upon reaching the kitchen, he set the shopping bag on the bench. The bread was placed into the bread-keeper, and the milk into a yellowing Westinghouse fridge. The man removed the newspaper before opening the cupboard under the sink to add the plastic bag to the growing collection. Filling the old-style, stove-top kettle, he fetched an ornate china cup and saucer, into which he placed an Earl Grey Breakfast tea bag.

When the brewing process was complete, he proceeded, with cup and saucer in one hand, and newspaper in the other, into the living room. Settling in his Jason recliner, the man glanced around the room. Few people would have picked the painting illuminated by the orange glow of the standard lamp as an Arthur Streeton original. But while they might not have thought his choice in art remarkable, they would more than likely have taken a second look at the collection of newspaper clippings which were taped to the far wall of this cosy little room. "Lindfield mother of three still missing -- police fear the worst," read one. "No clues in Sarah Bryant case," announced a headline from the Daily Telegraph. "Have you seen this woman?" enquired another.

The man took a sip from the steaming cup, and then, removing his reading glasses from his top pocket, unfolded the morning paper.

This is for the "character building" prompt.

Photo: Maksym Kozlenko, Creative Commons 3.0 licence.
Club entry for the "Character Building" event in "Not A Flash In The Pan".  Locate a writing club. Pays one point and 2 member cents.

Pays: 8 points. and 37 member cents
Copyright © 2000 - 2021 FanStory.com. All rights reserved. Terms under which this service is provided to you. Our privacy statement.
top
You Have No Rank
Share 4 posts to be ranked.