"Like every book I never wrote, it is by far the best book I've ever written."

How would it happen? Contest Winner 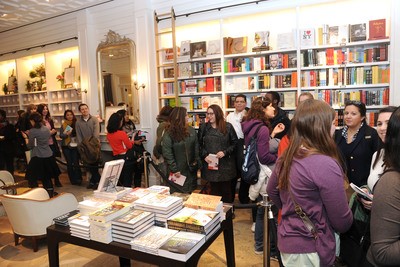 The line at the Strand Bookstore stretched down Broadway almost as far as Union Square Park. The woman in jeans and a Fleetwood Mac t-shirt had joined the queue at 4:30 a.m., and thus was among the first hundred in line. Nevertheless, the store didn’t open until 9:00, so by the time she had made it to the door at 9:45, she had been on her feet for over five hours. Now that she was inside, she could see the light at the end of the tunnel. The light was Duncan Fitzwater, US Poet Laureate and cultural icon. He would sell more books this morning than most poets do in a lifetime.

He had burst upon the scene in 2014 with the publication of his collection “Feeble Rain”, the title coming from a line in his breakout poem, “The Loom”.


The Loom
(for Lydia)

Softly, softly as we billow
Watch our smugness melt away
Feeble rain and thrashing pillow
Obfuscate the break of day


Looking back on it now, knowing the place it has earned in the pantheon of American poetry, it’s difficult to believe that it was not initially met with critical acclaim. On the day after it was published, a reviewer in the Cleveland Plain Dealer called it “refrigerator magnet poetry”. The Chicago Tribune’s review consisted of only two words: “Say what?”

It was only after a piece in the New Yorker lauded it for being a “golden beacon shining through the miasma of rubbish that is modern American poetry”, that the poem took root in the American psyche, and Duncan Fitzwater became a household name. He was THE darling of book clubs across the country.

2014 belonged to Duncan Fitzwater. President Obama awarded him the Presidential Medal of Freedom. The New York Times Book Review ran a ten-part series entitled “The Genius of Duncan Fitzwater”. Poetry Magazine declared “American Poetry is Saved”. Oprah stated that she would never again read anything else because she had found perfection, “After having read Fitzwater, I would rather gouge my own eyes out with a spoon than to attempt to read anything else” she was quoted as saying. Maya Angelou died. Coincidence? Perhaps.

The atmosphere in the bookstore was electric. There were only about ten people in front of the woman in the Fleetwood Mac t-shirt now. With each place she advanced in line, her breathing became more irregular. She was close enough to the table where he was signing books that she could make out some of the conversations he was having with fans. He sounded exactly as she imagined he’d sound; erudite, yet humble.

The woman whose book he was signing at present mentioned that her favorite poem was “The Hydrant”.

The Hydrant
(for Lydia)

She had gone astray, become a stray.
and now only these things remained:


The New Yorker described this as, “an attempt to pull Manichean dualism back into the boat – to add ballast to a world set adrift by post-modern nihilism”. Other readers saw it as a commentary on our self-alienation: our need to urinate representing our primitive life force, a source from which we are disconnected thanks to the faithlessness of the technology, represented here by the unseen female dog (or “bitch”). Our joie de vivre (represented by the bright red hydrant) now gone, we no longer enthusiastically pee, rather we joylessly lift our hind legs.


One thing all readers wondered was, “Who’s Lydia?” Every poem he had ever written had been subtitled “for Lydia”. Some dismissed it as just being “his thing”, the way ee cummings' “thing” was not using the shift key. Others, though, imagined perhaps that there was a Lydia out there somewhere, especially after he published “Lydia”.

Hey Lydia
If you’re out there
Call me


While the New Yorker’s take on this one was “a refutation of Nietszche’s concept of a metaphysical foundation for moral truths”, many readers saw it as an attempt to reach a woman named Lydia.

There was only one person in front of the woman with the Fleetwood Mac t-shirt now. She’d been rehearsing what she’d say to him for two weeks, since the moment she learned he’d be signing his books here in Greenwich Village. She rehearsed in front of a mirror, into a tape recorder, in front of friends. But now, at the moment she stepped up to the table to meet him face to face, all that she had rehearsed fled from her mind and she was left with only these two words:

“Excuse me?” the poet inquired.

His dropped his pen and sighed “Lydia”. They had never met in person before, but they had inhabited the same cyberworld: the nation’s premier website for aspiring writers – FanStory. Lydia had never posted a photo of herself on her FanStory profile. That never stopped Duncan from imagining what she might look like. Now that she was here in front of him, he thought that she looked even more beautiful than he had imagined, if that were possible.

Duncan went one better than Lydia; not only did he not post a photo of himself, he didn’t even use his real name on FanStory, opting to write under the nom de plume, Chitown Charlie.

“How did you know it was I?” Duncan asked, flawlessly using the subject pronoun. “Was it the dedications?”

At one point they had been the 476th and 477th ranked poets on FanStory. Their cohabitation in the metaphorical cellar created a camaraderie between them that, at first found them exchanging supportive emails, and later resulted in their posting poems dedicated to each other:

Lydia, my Lydia
Should you give me chlamydia
I still wouldn’t get rid  a’ ya
That’s how much I wanna get widdy ya
Next to “angel” in Wikipedia
Is a picture of my Lydia

I wanna give all my member cent pumps to you
Sing the Black-Eyed Peas song, ‘My Humps’ to you
Dance real close and grind rumps with you
Get a penthouse suite just like Trump’s with you

From there, the poems just got more risqué. Tom Ens pointed out that, even with a language warning, these poems still violated FanStory’s strict modesty code. When Charlie (Duncan) and Lydia persisted, Tom had no choice but to redact much of the language before letting their poems be posted. Charlie’s “Easy Peasy Lemon Squeezy” was severely redacted, and Lydia’s haiku, “Wait for the Satori” saw only two of the original seventeen syllables make the final cut.

The censorship eventually became too much for Lydia, who, in May of 2012, informed the man she knew as Chitown Charlie, that she was leaving the site. He pleaded with her not to go, but his messages fell on deaf ears, as did this, the last poem he would post on Fanstory:


As they stood on opposite sides of the table in the bookstore, Lydia said aloud the question that was on both their minds: “Now that we’ve found each other, now that we’re here, what do we do?”

Duncan stood up from his chair behind the table, held his hand up, and addressed the crowd.

“Excuse me ladies and gentlemen. I want to thank you all for coming. I’ll be happy to sign all your books, but first, I’d like to address the two questions I am asked most frequently, those being, ‘Who is Lydia?’, and ‘Is there a hidden meaning to your poems?’ I think I can answer those questions best by reciting my latest poem, which I just this second composed. It’s called “Let’s Do It on the Table” and it is dedicated to the woman standing in front of me. Her name is Lydia, and the poem goes like this:“


Hey Lydia,
Let’s do it on the table.
Right here. Right now.
In this bookstore.”


With that, he swept away all of the books and pens that were on top of the table, and laid Lydia down where they had been. The subsequent series of events resulted in their arrests (they were ultimately convicted but given only probation), and in Duncan’s fall from grace as a poet (“I guess ‘The Hydrant’ was just a stupid poem about a dog peeing after all,” wrote a critic in the New Yorker).

Nevertheless, they are happy today. They were married last autumn and currently reside in Greenwich Village. They still write and have rejoined FanStory, though they are now using pseudonyms. Can you guess who they are?


© Copyright 2021. Mark Valentine All rights reserved.
Mark Valentine has granted FanStory.com, its affiliates and its syndicates non-exclusive rights to display this work.