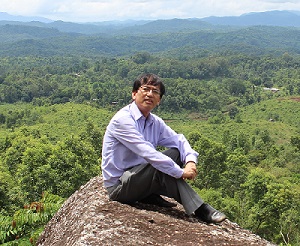 It was almost midnight. I had a bad day, but I look forward to reaching home to be with my family. The children might have slept, but at least my wife would be there to welcome me.

On reaching the driveway leading to our house, to my astonishment, I found the gate locked. I got down from my car and went to the gate. Yes, they locked the gate. I was about to explode. My anger was beyond words. I thought of honking the car, but I do not want to disturb the neighbors. I came back and sat in the car.

Then, that silent voice inside my heart told me to leave and go away. It was almost midnight and shall I obey the voice to leave and go? Frequently, I have learned many lessons that it was better to listen and obey that small and silent voice than to go against it. I knew that if I force myself to go inside my house, there would be quarrels and shouting. I could not control my anger.

Better to avoid this kind of situation and leave. It would be better to listen to that small, silent voice and leave. Let me cool my head first and then decide what to do later. Before I leave, I gave them a small honk two, three times to let them know I came home. Then I reversed my car and left the driveway.

While reversing the car, I saw somebody, probably the maid (She had been a wonderful lady), coming from the house to open the gate. But as I had already reversed the car, I left and drove away.

After a few minutes, I reached the community parking lot and stopped the car. It was almost midnight. What have I done? Why did I do this? Where should I go now? What a situation I put myself in?

Sitting there in the car, alone and almost midnight, I thought of what had just happened.

We called the service engineer. He was busy in another office, which incidentally had the same problem. Then he told us to wait. After solving the problem there, he would come to our office.

While waiting for the service engineer, we cooked and had a simple dinner in the canteen. By the time the engineer came, it was after 10.00 PM. He ran some programs and solved the problem. We left the office after 11.00 PM. I reached home around 11.30 PM.

After a hard day's work and problems in the office, I was expecting a happy welcome home from my loving wife. Of course, the children would be asleep. We make a habit for them to sleep before ten o'clock.

Instead of a cheerful welcome, I found the gate closed. When a problem comes, they came in droves.

Now, I was alone in the community parking lot. What would I do now? I thought of going to my brother's house. But on second thought, I decided not to. I could not go to my brother's or any of my relative's houses. I could not explain my rationale for leaving the house. They would laugh at me.

I looked at the watch and saw that it was almost midnight.

Then again, that same voice inside me told me to go driving around. So, I listened to that voice and drove around the city. That way it would also be safer for me than staying in the same place.

So, I started my car and drove it around. After a few minutes drive, just about midnight, I came across a place where two people were standing on the roadside. Initially, I thought they might be robbers or thieves as it was around midnight. When they waved their hands to stop my car, I drove bypassing them. Then, I saw that one of the people was a lady, and the way they waved their hands signaled they needed a lift.

It was difficult to decide. Should I stop or should I drive by? Then again, that small voice inside me told me to stop. I have encountered many situations like this and I felt bad when nobody helped me. But I blessed those kind souls who helped me in my times of genuine need.

So, I reversed my car and reached where they were standing. When I opened the window, the man told me.

"Bah, (Elder brother) my wife is in severe labor pain. Please take us to the hospital."

I opened the side door, and they got in. Once inside the car, they thanked me profusely. Then they told me their story.

They recently came to the city for work as laborers. They have no relatives and no friends. His wife was in severe labor pain and they needed to reach the hospital.

Seeing their urgency, I drove the car a little fast, but again the lady requested me to drive a little slowly as she might give birth inside the car. It would be a big mess if that happened.

When I asked them, which hospital should I take them to?

"We cannot afford to go to private hospitals. Please take us to the Government hospital."

There are private hospitals nearby, but since they told me so, I have to take them to the Government maternity hospital, which is a little farther.

I looked in the driver's mirror and saw the lady clutching her husband's hands while I drove. And I could sense that she was in severe pain and silently praying.

We reached the hospital. Immediately, the husband helped her to get down and took a wheelchair to take her inside the hospital.

Then I told them, "I will wait for you here. In case of any problem, please come and tell me." You never know what would happen in a Government hospital. Sometimes they could not admit people because of overcrowding or any other problems.

I was sitting in the car and thinking about the situation. What a coincidence. We had problems in the office. I was late for home. On reaching home, the gate was closed. I listened to that small silent voice to drive around. I helped the hapless couples and here I was past midnight.

After some time, the husband came and told me they admitted his wife to the hospital. They have taken her to the labor room. He would have to wait in the waiting room.

Then, he took out his wallet and said, "Bah, thank you so much for bringing us here. How much shall I pay you?"

Here was the tricky part. You should not say 'no' directly to these people. They may be poor, but they have their self-respect. I did not want to hurt them. So, I have to be tactful.

"Look here, brother. My car is a private car. It is illegal for me to carry passengers. As it is illegal, I cannot treat you as a passenger. Therefore, I am treating you and your wife as friends. So, I cannot charge any fares from my friends."

He understood and said, "Thank you, Bah."

He was about to leave when he turned back. He came closer and whispered in my ear,

"Bah, do you believe in God?

"I was doubtful how God would take us to hospital. But then you came along. When you drove by, I thought, God, is playing a joke on us. Then you reversed your car and took us to this hospital. Many times, I have doubts about God, but tonight I know God exists and hears our prayer. He brought us to the hospital through you. Thank you. "

He left me speechless.

This was a real story that happened to me a few years ago.
Photo courtesy: pexels.com
Pays one point and 2 member cents.