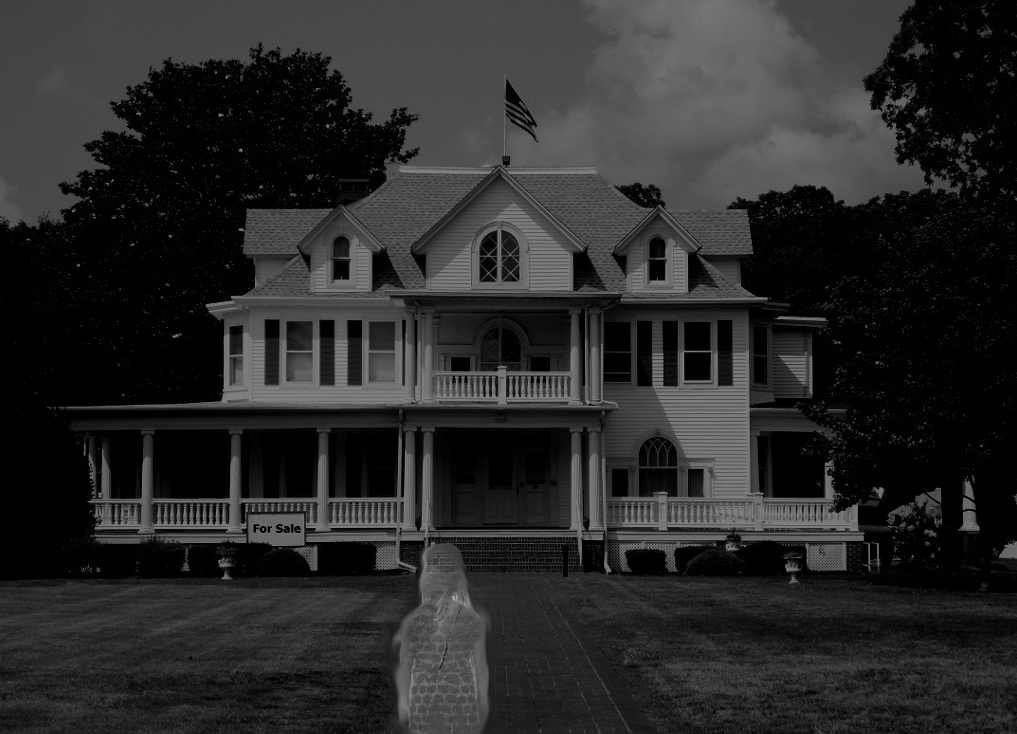 "It's absolutely gorgeous!" Julie Weiss stared open-mouthed at the white painted timbers and columns of the sprawling house at the end of the path. "Miss Cranley, thank you so much for agreeing to show us the house at this late hour. I know you should be home having dinner with your family."

"It's no trouble at all, Miss Weiss. I know you and Mr Majors both have very busy jobs. Besides, with the owners being overseas, it's not inconveniencing anyone. My Jerry will have dinner waiting for me when I get home, so that's less work for me. We can check out the rest of the grounds later. There is good floodlighting, but for the moment, I presume you'd like to see inside? It's getting a little chilly out here."

"Please, let's." As they set off up the path, with the real estate agent leading the way, Julie playfully pinched her boyfriend on the buttocks, her wide eyes and open mouth removing the need for any further comment. Brent shot a look of mock rebuke sideways, slapping her hand away.

"I think you'll find the owners are willing to consider all reasonable offers," Laura Cranley said, as she worked the key in the lock. "They are quite motivated to sell. Since the accident, things have become—"

"Did I say accident?" Laura's brief pause caught Brent's attention. "I'm so sorry, I meant to say incident. Something to do with an IRS investigation, I believe. In any case, I think you'll find there is room for negotiation. Now, the light switch should be just here around the corner..."

A soft click, then a warm glow illuminated the foyer, revealing glass sliding doors to either side and a mahogany staircase directly in front of them.

"Let's have a look at the kitchen first — it's through here to the right."

"Look, Brent! A gas oven and stove top, and a wood-burner as well! I've always wanted one of those. And a walk-in pantry!"

"You won't have any trouble finding wood to keep that stove going. You have fourteen acres of woodland here behind you. There should be plenty for all the fireplaces as well. Now, shall we move on? I think you're going to love the sitting room."

As Brent followed Laura and Julie through the door opposite to the one through which they'd entered, there was a soft, whooshing "pop" sound from behind him.

"Oh, my goodness!" Laura Cranley stepped past Brent, and made her way to the gas stove, where a ring of orange-tipped blue flame surrounded one of the burners. "How on Earth did that happen? I'm so sorry. I will most certainly have the maintenance people look at that first thing in the morning." She reached over, and turned the knob to the left, extinguishing the flame.

With every room they visited on the ground floor, Laura fell more in love with what she saw. The dining room was more what she thought of as a banquet hall. The downstairs bathroom was a beautiful reconstruction of a turn-of-the-century creation, complete with claw-footed tub and pedestal basin. To the left of the main hallway was a large room filled with musical instruments — a keyboard, several guitars and a banjo. There was also an impressive array of amplifiers, mixers and other electrical equipment. Tall speaker stands occupied each corner.

"What a perfect craft room this will make!" enthused Julie. "I can stand and look out over the garden while I paint."

"Pool room and bar," Brent corrected her, a wry grin on his face.

As they climbed the staircase to the first floor, Brent imagined the faint sound of Scott Joplin's "The Entertainer" coming from the music room. Julie imagined it too, but neither said anything.

The first floor bathroom was a much more modern affair, with a pleasing array of black and white tiling, creative use of mirrored surfaces, and just the right amount of shiny chrome.

"Through here, we have a special surprise, but I'm saving that for later. Shall we head up to the top level? There are four gorgeous bedrooms you're just going to love." Laura began ascending the stairs, as behind her, Julie interlocked her slender fingers between Brent's.

The master bedroom left the young couple speechless. Neither had ever seen one containing a sunken spa before. The two bedrooms to the right were more simple affairs, the smallest being only half as big again as the master bedroom in their current house.

"I think you might like this." Laura stepped past Brent and Julie, turning the shiny brass knob to the last door. She pushed it open, and stepped inside. A couple of seconds later, after flicking on the lights, she motioned for them to follow.

Julie took in her surroundings. Pastel-coloured murals lined each wall, with pictures of puppies playing on fields of green grass, butterflies sunning their wings on bright flowers, and a deer walking through a rainforest. Over in the corner, a white-painted crib with a couple of fluffy toys sitting on top of the bunny-print quit.

"Any ideas what you might like to do with this room?" Laura directed her question to Julie, her eyes traveling from Julie's face, down to the very noticeable bump in her belly.

Julie smiled broadly at her, opened her mouth to respond, and instead let out a shrill scream, as the unicorn mobile perched over the crib began spinning wildly of its own accord. Two small photo frames perched on the dresser fell flat on their faces. As Julie clutched tightly to Brent, Laura took several large steps over to the window.

"Stupid cleaner. They must have opened this to let in some fresh air, and forgotten to close it." She grabbed the frame at the top of the lower pane, and slid the window down, flipping the latch when she was done.

"I think we might have seen enough. The house is beautiful, but we have dinner bookings. How about Brent and I chat about this over dinner, and we can call you in the morning, first thing?" Julie sounded a little shaken.

"No problem. We're pretty much done here anyway. I will just show you that special surprise on the way down, and then you two can go enjoy your dinner."

Back on the middle floor, Laura pushed open the heavy wooden door and turned on the light. She stepped inside, followed by Brent, then Julie. Every wall was lined with bookshelves from floor to ceiling. Thousands upon thousands of volumes ensured there was no vacant space. Against the window was a large, roll-top desk, with a plush leather chair in front of it.

"Welcome to the library. Could a writer such as yourself make use of something like this, Mr Majors?"

"I thought you might appreciate it, I have sold many homes, but I haven't seen a better study than this one."

For the second time that evening, Julie screamed, as a large volume fell from the second-to-top shelf on the far wall, crashing loudly to the floor. When three more books followed in quick succession, Brent joined her.

"What the hell is going on?" His arm reached around Julie's shoulder.

"Earth tremor? We get them a couple of times a year in these parts. Damned poor timing."

"I don't—" Brent never finished the sentence, as mayhem broke loose. Books from everywhere began flying off the shelf, some hurtling across the room to slam into the opposite wall. One hit Brent in the shoulder.

Julie, by now, was crouched down low, leaning against the wall, with her hands over her head, sobbing. Brent reached down and took her by the upper arms, gently lifting her to her feet. He embraced her, and whispered something inaudible to the agent into Julie's ear. She nodded, and he took her hand. Without waiting to see what Laura was doing, he yelled back over his shoulder "We're out of here," as he almost dragged Julie off her feet in his haste to make the stairway.

As they descended the stairs, several family portraits flew from the wall, crashing in front of them, to the sound of splintering glass. Brent paused, unsure whether to continue, but when it appeared the barrage of paintings and photos had stopped, he urged his girlfriend onward. Approaching the front door, in the condensation which had formed on the inside of the frosted glass pane, a single word appeared before their eyes — "Bye!"

Julie Weiss and Brent Majors were across the lawn, into their car and a quarter of a mile away by the time Laura Cranley made it to the kitchen. She stood at the servery, poured herself a large shot of straight Brandy and sat at the small table, reaching up to undo the bun and let her long, dark hair fall over her shoulders.

Laura watched as a dark-coloured bottle, two along from her favourite Brandy, raised itself into the air. The bung popped from the bottle and floated to the bench. Then the bottle tipped itself up, and a vibrant blue liquid, looking very similar to Blue Curacao spilled from the rim, seemingly disappearing into thin air. Within a few seconds, a human form slowly began to materialise.

"Well, Jerry Griffin, you certainly outdid yourself this time!" Laura beamed at the naked male figure in front of her. "That's got to be the fastest we've got anyone out of here yet!"

"You weren't too bad yourself, my darling. Earth tremor? Oh, Lord!" They both burst into laughter.

Laura took a swig on her drink. "Well, I would say that could be just about it. I think old Major Templeton has probably had just about enough by now. It seems he can't get a single offer on this place. By the end of the week, I wouldn't be surprised if we can snap it up for half the asking price."

"And the mad scientist and his adorable fiancee lived happily ever after, in the mansion by the forest." Jerry grinned at Laura. "Maybe, they could even get married there. Say, honey — you should try a swig of this potion some time, just think of the mischief you could get up to if you were invisible!"

"Oh, Jerry. I'm a forty-something year old working woman. To half the population, I already am invisible. Now, look at you, standing there without a stitch on. You'll catch your death. Why don't we head up those stairs and see if we can't find a way to warm you up?"

My assigned subject was "The Invisible Man".