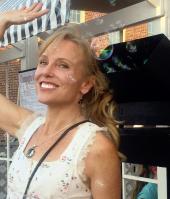 From Fame to Tragedy 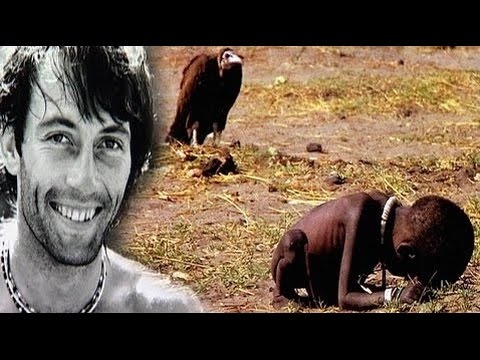 Kevin Carter, best known for his award-winning photographs of Sudan's horrific famine, was born on September 13, 1960 in Johannesburg, South Africa where he spent most of his life. He grew up in a middle-class family, yet often witnessed brutality against black people who were illegally living in his all-white neighborhood. The fact that his parents were so complacent about the violent police raids greatly disturbed young Carter.

After high school, to avoid being drafted into the infantry, Carter enlisted in the South African Air Force in which he served for four years. Living and working with people who had the job of defending their country, Carter was shocked to find injustice happening among the servicemen. An especially upsetting incident took place in the mess-hall where a black waiter was being harassed by a group of officers. Carter quickly stepped in to defend the innocent server and was badly beaten by his fellow military men. Carter also witnessed the Church Street bombing which killed many innocent civilians. These atrocities prompted him to become a photojournalist with hopes of exposing the inhumane acts of cruelty taking place in South Africa.

While working for the Johannesburg Star, Carter was the first photographer to capture a public "necklacing" execution (a form of punishment common in the mid 1980's where a rubber tire is filled with gasoline, placed over the head of a victim, and set on fire). Carter said, "I was appalled at what they were doing. But then people started talking about those pictures... then I felt that maybe being a witness to something this horrible wasn't necessarily such a bad thing..."

In 1993, Carter travelled to South Sudan to cover the country's famine, as their government wanted the world to know about the severity of the crisis. He photographed people suffering from extreme starvation. Mothers with empty breasts held their dying babies. Bodies of skin stretched over bones lay on the parched land, waiting for death to end their misery. The image of one child, however, would eventually travel across the world and lead Carter into sudden fame.

At the end of his photo assignment, and with an hour left before his plane was to leave, Carter headed to the runway when he saw a young child face down in the dirt. He later told a fellow reporter, "You won't believe what I've just shot! ... I was shooting this kid on her knees, and then changed my angle, and suddenly there was this vulture right behind her! ... And I just kept shooting." Carter titled his famous photo, "The Vulture and the Little Girl."

Carter's photograph was published in the March 26, 1993 edition of The New York Times and spurred an overwhelming response. In 1994, the image was awarded the Pulitzer Prize for Feature Photography and "Picture of the Year" by The American Magazine.

Along with all the recognition, however, came questions and accusations. "Why didn't you do something to help?" people asked. Others wondered about the fate of the girl in the photo and how a photographer could simply take pictures of the child without taking action. Carter was also criticized for not rescuing the toddler from her stalking predator. The negative reactions from the public tortured Carter and added to his already traumatic experience. He wrote, "I am haunted by the vivid memories of killings and corpses and anger and pain." And, he wished people would understand the conditions of his job.

Carter had been escorted by armed soldiers who would not allow him to intervene. Not only did the Sudanese want him to capture the uninterrupted reality of the famine, they were also concerned about the spread of diseases. There was a no-contact policy, and there were men with guns to enforce it.

After Carter captured images of the collapsed child, he chased the vulture away. He then lit a cigarette, talked to God, cried, and thought of his own young daughter. Incredibly, the child (who was actually a little boy) survived and lived for 14 more years; eventually dying of Malaria. Carter's life post-photo, unfortunately, was much shorter.

Maybe during all the publicity, Carter felt like a vulnerable child himself as society picked him apart, vulture style. Nobody, however, was there to chase his vulture away. Three months after he won the Pulitzer Prize for his photo of famine, 33-year-old Kevin Carter drove to the bank of a small river where he used to play as a little boy and committed suicide. The cause of his death was carbon monoxide poisoning. His suicide note began with the following statement:

"I am really, really sorry. The pain of life overrides the joy to the point that joy does not exist"

His daughter was six-years-old at the time of Carter's death, and she now owns the rights to her dad's famous photograph; the image of a suffering child that sparked fame, ignited guilt, and became one of the most influential pictures of all time.


© Copyright 2021. Amy Greta All rights reserved.
Amy Greta has granted FanStory.com, its affiliates and its syndicates non-exclusive rights to display this work.


What We Pray
Slight change in the Lord's prayer relieves my 8 year old.

Pays: 10 points. and 88 member cents
Copyright © 2000 - 2021 FanStory.com. All rights reserved. Terms under which this service is provided to you. Our privacy statement.
top
You Have No Rank
Share 4 posts to be ranked.