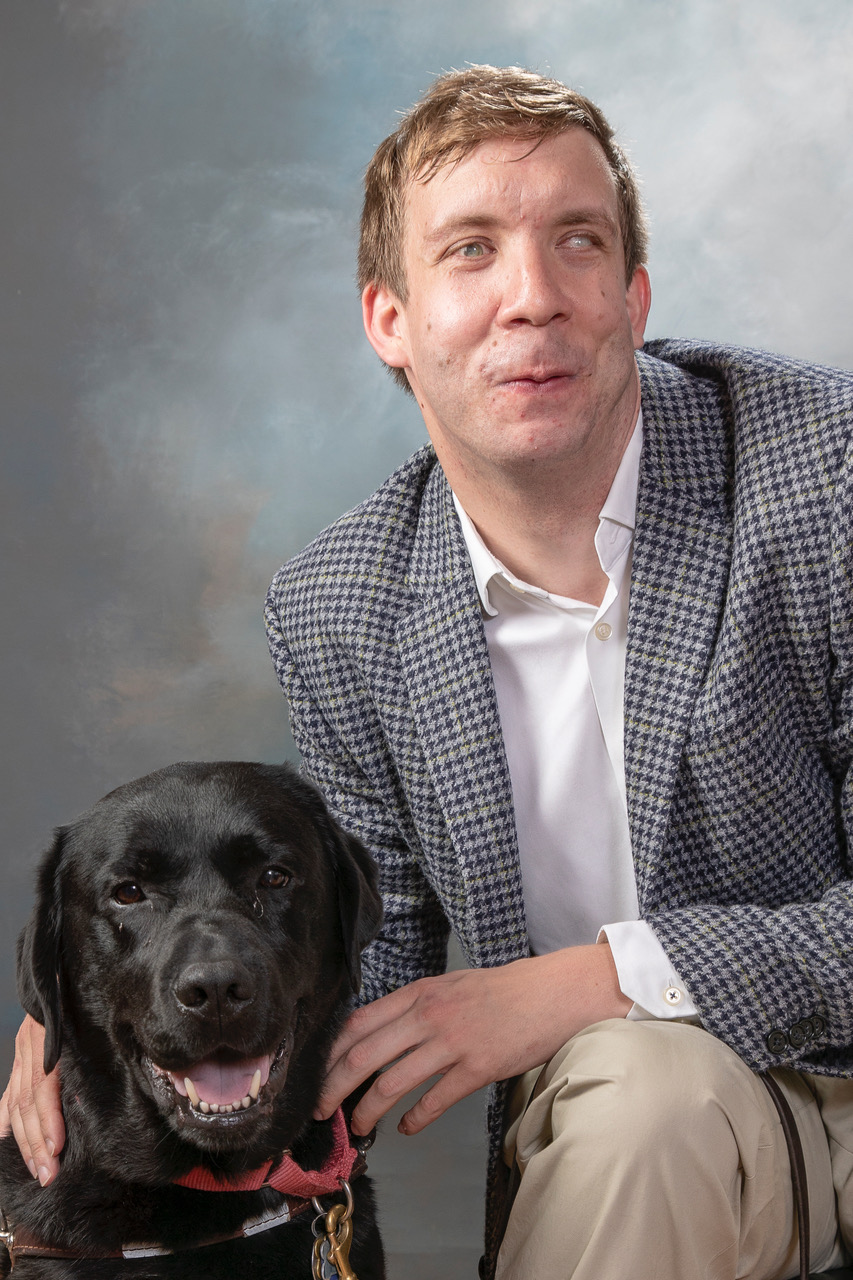 After his brother and sister-in-law are killed in a car accident overseas, NYUlaw professor Jefferson Thomas gains custody of his young nieces and nephew, bringing them to his home in Manhattan.


The plane landed at the John F. Kennedy International airport. Abigail, who had seemingly grown bored of flying in the last hour and a half, was now ready to move on to the next adventure.

"Calm down," Jefferson told her as people passed between them. "We'll wait just a couple more minutes and go when it isn't so crowded.

At his feet, Presley was fidgeting. She too wasn't content to wait. When Jefferson gave her the command, she bolted out of the row, ready to go.

Jefferson was expecting an airline employee to meet them at the end of the jet bridge. instead, they were met by a man who identified himself as Agent Keith Noble from the Transportation Security Administration.

"I've been instructed to make your reentry process a smooth one," the agent explained. "Since there is no notarized letter from the children's parents permitting them to accompany you, we want to work to prevent any hiccups."

Jefferson wouldn't argue with this logic. Making sure the kids were with him, he took Agent Noble's elbow, Presley walking by his side.

They first went to the baggage claim to collect the kids' bags, which took a little while as the items had somehow been distributed throughout the plane's cargo hold. The last two bags were among the last few items to emerge onto the belt.

"Stay close to me," he said over his shoulder more than once. None of the kids responded, but he got some comfort from hearing their small footfalls on the airport's linoleum.

"Welcome back to the United States," the customs official said when Jefferson's turn came. "Did you enjoy your trip abroad?"

"Not sure," Jefferson replied, unable to come up with a better answer as he presented his passport.

"Are you declaring any perishables? Any fruits, vegetables, or meats?"

"No," Jefferson replied, wondering when he would have had the time to get any of that stuff.

"Is your dog from the United States?

"Yes," Jefferson said, retrieving Presley's vaccination certificate from the side pocket of his overnight bag. "That's from my vet in Manhattan."

"And these are your children?" the official asked, seeming to notice the twins and Matthew for the first time.

"No," Jefferson said, retrieving an envelope from his overnight bag along with Margaret's passport. "Their passports are in here."

"What is your relationship to these children?" the official asked, taking Margaret's passport.

"I'm their uncle," Jefferson explained, "and now their guardian."

"Do you have any documentation to confirm this?"

the customs official sounded ready to summon the police. Jefferson presented the envelope, wanting to do anything to avoid outright saying Stanley and Margaret were dead.

"That's a letter from the U.S. Ambassador in Berlin, Germany," he explained. "It gives me permission to bring the kids here to New York with me."

Somewhat reluctantly, Cassandra Kingman had explained the State Department had no protocol in place for if one of its overseas employees and their spouse was killed, leaving their children in a foreign country without a legal guardian. Though she and Jefferson never met, Ambassador Kelly Ridder wrote the letter and affixed the seal of the United States next to her signature to affirm her government's support for the family's relocation.

The customs official read the letter and nodded slowly.

"Okay," he said in a more somber tone, stamping all the passports. "Welcome back to the United States."

the group emerged in the bustling public area of the airport's terminal building. Despite the onslaught of noise, Jefferson almost immediately heard his name being called through the crowd of waiting family members and limo drivers there to receive clients.

A man was finally able to get through the crowd to meet the group. He stopped to catch his breath before speaking.

"I'm good," Jefferson replied, recognizing the speaker as his friend and colleague, Eric Nelson. "You sound like you've been having fun here."

Eric's voice lost its sarcasm as He turned to Agent Noble.

Agent Noble nodded, seemingly somewhat relieved to not have to push the cart anymore.

"You folks take care," he said and walked away.

"Guys," Jefferson said. "This is my friend, Eric Nelson. He was nice enough to come to drive us home."

"Amy's circling the building with it," Eric explained. "I figured it'd be easier to bring her than try to park in this nightmare. Shall we?"

He got behind the cart and began pushing.

"Jesus Christ!" he said almost immediately. "What did you pack in these bags? Bricks?"

Abigail giggled as she began following him. Given Eric was five feet, eight inches tall and weighed around a hundred and seventy pounds, Jefferson didn't find his complaints too unexpected.

They made their way out of the building, where Eric stopped the cart and called his wife.

"Trust me," he said, speaking loudly to be heard over the traffic, "we're hard to miss. Look for the Mount Everest of luggage."

Amy Nelson pulled up a few minutes later and got out to meet the kids, ignoring the glares from a nearby police officer. Being two inches taller than her husband and a former cheerleader, Amy was the most confident person Jefferson knew.

"I have heard so much about you guys," she said. "Welcome to New York. How was the flight?"

"I don't know how we're going to fit everything," Eric said, having pulled the luggage cart towards the back of the minivan and opening its rear door.

"We'll figure it out," Amy insisted, pulling open the minivan's sliding door. "Jefferson, you get these kids in the car. Reach out straight of you and you'll have the door."

She moved to the back to help with the bags.

"I'm surprised they let them on the plane," Amy added, lifting the first bag into the back of the minivan.

"Abigail," Jefferson said, figuring out how to flip one of the middle row's seats forward, "you mind sitting in the back row with Presley?"

"Sure," Abigail agreed, scrambling past him into the minivan.

"Amy!" Jefferson called. "I'm going to see if Presley needs to go before the drive."

The dog hadn't had a chance to relieve herself since leaving Berlin. He moved towards the front of the minivan and extended Presley's leash a little, urging her to step off the curb.

Not one to disobey a command, Presley peed. She didn't sniff around to select a spot to defecate and instead stepped back onto the curb, indicating this was all she needed to do.

They stepped back to the open van door, where Amy met them with one of the duffel bags.

"Skootch over, Abby," she said. "I need to put this back there with you.

"I don't like that name. My name is Abigail."

"Understood," Amy said with a patient smile. "Could you please move over so I can put this in?"

In the back, Eric shut the door as Amy heaved the last duffel back onto the rear row next to Abigail and Presley. She then flipped the seat back down and turned to Matthew.

"See that booster seat?" she asked, pointing out the seat on the far side inside the minivan. "That's yours. Hop in."

Matthew did so and she followed him, gathering the seat's straps in one hand.

"Both my sons sat in this," she explained as she buckled each strap. "Lucky we still had it in the garage.

"You're driving," Eric insisted, climbing into the front passenger seat. "The airport gave me a headache."

"Don't get too comfortable," Amy advised as she slid out of the minivan again. "I need directions once we leave Queens."

She directed Jefferson in, followed by Taylor, and slid the van door shut.

"I'll tell you where to go," Eric promised as she got in behind the wheel.

The ride lasted about half an hour, during most of which Abigail asked questions about almost everything she saw. Jefferson, Eric, and Amy answered everything as best they could.

"That's a butcher's shop," Eric said at one point after another query about a sign baring a cartoon pig. "Doubt you'll ever go to that one. It's a bit far from home for you guys."

Meanwhile, Taylor had fallen asleep, her head resting against Jefferson's side. Glancing in her rearview mirror every so often, Amy smiled at the sight.

Much like his sister, Matthew was interested in their surroundings. He was still determined to find a park.

"I think there's one near where you live," Amy said, though she was far from sure.

By the time they pulled up in front of Jefferson's brownstone, Abigail was getting tired and had quieted down a bit. After executing a complicated maneuver to exit the van without waking Taylor, She and Matthew followed Jefferson up to the front door. He unlocked it and brought them inside, showing them where they could leave their shoes and helping them hang up their jackets. With the pair settled on one of the den's couches, he went back outside to help Amy and Eric unload the luggage. They piled the bags up in one corner of the foyer with Jefferson making plans to sort it out later. For now, he just wanted the stuff out of the way so he wouldn't trip over it.

The last thing left in the van was Taylor, who never stirred despite the activity around her. Jefferson scooped her up and, with help from Eric and Amy, who made sure he didn't run into anything or trip along his way up the front steps, brought her into the house and set her down on the second couch. With Amy's help, he got her shoes off and covered her with a blanket. Taylor still barely flinched.

Jefferson and Eric stared at her.

"We have to go to a supermarket," Amy elaborated. "Jefferson probably never got a chance to go before he went to Germany. We need to get a few things for him and the kids."

"You don't have to ..." Jefferson began but Amy shook her head.

"You need to feed these kids properly," she admonished. "I'm willing to bet your milk's probably gone bad by now. You can't give them that."

As he had done before, Jefferson marveled at the couple's union. Eric, a self-described "major nerd turned major legal nerd", and Amy, who never objected to her husband's description of her as "amazingly hot", getting together was almost a clichÃ© from a cheesy teen comedy. Where Eric was thin, Amy was athletic, one hailing from the chess club and the other the cheer squad. He could be invisible in a crowd while she turned heads wherever she went.

Still, they had their similarities. Both were smart and outgoing, having met in a library at Columbia University. Eric's hair was blond and Amy's was strawberry blond. They shared a passion for swimming, though Eric conceded his wife was better at it. And, they were happy together. Jefferson had just one problem with that ... Amy wasn't with him. She'd chosen Eric and he probably knew why.


This is again largely based on my own experiences with international travel, minus some of the drama.

I have rearranged this story a bit. It is now thirty-eight chapters (instead of the original forty-two.)


© Copyright 2021. teols2016 All rights reserved.
teols2016 has granted FanStory.com, its affiliates and its syndicates non-exclusive rights to display this work.

Pays: 10 points. and 1.09 member dollars
Copyright © 2000 - 2021 FanStory.com. All rights reserved. Terms under which this service is provided to you. Our privacy statement.
top
You Have No Rank
Share 4 posts to be ranked.